At the core of “Ripcord,” which opened Tuesday at MTC’s Off Broadway Stage 1 Theatre, is a Lifetime movie struggling to escape the quirky trappings of David Lindsay-Abaire‘s comedy. Rest assured: The show makes the escape with barely a bruise to anyone’s heartstrings.

After plays like “Fuddy Meers” and “Kimberly Akimbo,” oddball is what you expect from Lindsay-Abaire, as well as from actress Marylouise Burke, who holds the patent on garrulous, pixilated old women.

In “Ripcord,” Burke’s Marilyn takes another old woman, Abby (Holland Taylor), skydiving. Marilyn also takes Abby to a Halloween spook house, wherein a clown wielding a chainsaw pursues them. Director David Hyde-Pierce makes the most of these theatrical flourishes, as well as a few others, to distract you from the basic premise.

Abby and Marilyn share the same room in a retirement home, and Abby can’t stand Marilyn, who’s so adorable you want to squeeze her the way kids once squeezed Cabbage Patch dolls. Abby doesn’t want to squeeze, much less look at, Marilyn, which is why you’ll probably end up identifying with cantankerous Abby over adorable Marilyn, because, after all, who wants to be a Cabbage Patch doll?

To perk interest in this geriatric odd couple, Lindsay-Abaire introduces a novel game: If Abby can make the good-humored Marilyn angry, Marilyn will be forced to move to another room in the home. If Marilyn can scare the stoic Abby, Abby has to give up her bed near the window with its view of the park. 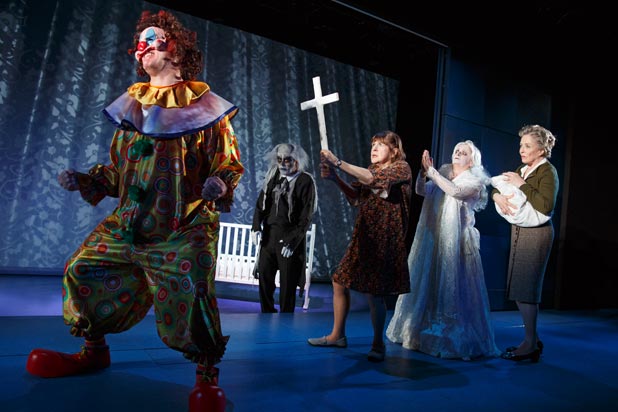 Granted, this conceit allows for more variations than the ongoing game of cards in the current Broadway revival of “The Gin Game.” But no number of Halloween clowns or skydiving stunts can make you want to swallow bromides like “You can’t give up on people. Once you do, it’s all over.” In the end, Abby is right about Marilyn. She’s insufferable.

To his credit, Lindsay-Abaire turns some of the schmaltzier moments in “Ripcord” on their head, and things turn out to be not as they first appear. One of these switches delivers a great 11th-hour jolt. For the theatergoer, it’s kind of like going into insulin shock then being told your sugar levels are just fine.