Rob Lowe and his son John Owen Lowe will star in the scripted comedy series “Unstable,” Netflix announced on Wednesday.

The series is based on Rob’s social media relationship with John Owen, who loves to humorously troll his dad. The series will be executive produced by both Lowes and “Santa Clarita Diet” creator Victor Fresco.

The series is set in a cutting-edge biotech research company, following an introverted, socially-challenged son who goes to work for his very successful, wildly eccentric father in order to save him from disaster.

“We are very excited to be working with Victor, Rob and John Owen,” Tracey Pakosta, Netflix head of comedy, said in a statement. “The three of them — and their wildly funny, smart sensibilities — are a perfect fit for our growing slate of scripted comedies.” 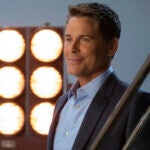 Rob currently stars in and produces Fox’s “911: Lone Star.” He also hosts the podcast “Literally! With Rob Lowe, and co-hosts “Parks and Recollection” with Alan Yang, about classic episodes of NBC’s “Parks and Rec.”

John Owen, 27, is a writer, producer and actor, whose credits include an appearance on his dad’s 2015 legal comedy from Fox, “The Grinder,” and the Netflix film “Holiday in the Wild.” John Owen has been a story editor on “911: Lone Star,” who has penned several episodes. He most recently finished production starring in and producing the independent feature “Grace Point,” from writer and director Rory Karpf.

Fresco has created seven television series, including “Better Off Ted” and “Andy Richter Controls the Universe,” for which he was nominated for an Emmy. He was also Emmy-nominated for his work on NBC’s “Mad About You.”