The Russian state-TV employee who went viral for holding a “No War” sign during a Channel One broadcast to protest her country’s invasion of Ukraine is not missing as had been reported, but appeared in court on Tuesday to face consequences akin to a misdemeanor.

Marina Ovsyannikova appeared to interrupt a live newscast Monday on Russia’s Channel One, shouting “Stop the war!” and holding up a sign that said, “Don’t believe the propaganda. They’re lying to you here.” The broadcast quickly cut to another video and Ovsyannikova, a former editor at the network, was detained. 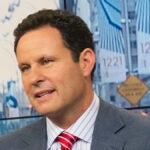 Citing a person claiming to be her lawyer, several reports said she could not be located late Monday. But on Tuesday, Kevin Rothrock, fellow journalist, podcast host and managing editor of the English-language version of Latvia-based Meduza, posted this image of himself with Ovsyannikova in a Russian court:

Later tweets from Rothrock said she had been detained and questioned for 14 hours and was not given access to counsel. She was later seen walking free and talking with reporters.

Human rights org OVD-Info said Ovsyannikova was arrested shortly after her Monday protest and was being held in a police station in Moscow. She could have faced up to 15 years in jail under Russia’s new “fake news” law, but the BBC said she was charged with organizing an unauthorized public event, comparable to a misdemeanor in the U.S., and faces a fine, community service or up to 10 days in jail. 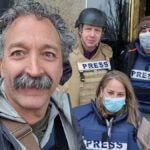 According to an English translation of the Meduza story, “The Ostankino District Court fined Channel One employee Marina Ovsyannikova 30,000 rubles (about $280) for walking into the frame with an anti-war poster during a news release. She was found guilty of organizing an uncoordinated public action.”

It’s not clear whether she could face further punishment, although Meduza’s story notes, “Ovsyannikova is also being tested under a new criminal article on ‘public dissemination of knowingly false information’ about the Russian military.” Meduza also reports that the fine is for her anti-war video, not for the on-air disruption. 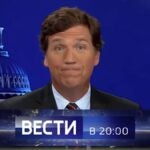 Before storming the Monday broadcast, she shared a pre-recorded video to social media in which told the Russian public: “What is going on in Ukraine now is a crime, and Russia is the aggressor. The responsibility for this aggression lies only on one person and that person is Vladimir Putin.”

Ovsyannikova, who said her father is Ukrainian and her mother is Russian, also apologized for “working on Kremlin propaganda.”

“Unfortunately, I have been working at Channel One during recent years, working on Kremlin propaganda, and now I am very ashamed. I’m ashamed that I’ve allowed the lies to be said on TV screens. I am ashamed that I let the Russian people be zombified,” she said.

Ukraine’s President Zelenskyy has praised her for “telling the truth.”