It’s called “Fox & Friends,” though not every exchange is friendly.

“We should have never provoked them,” Campos-Duffy said Monday. “I mean, they made it very clear that there was a red line. The red line was neutrality for Ukraine, that they not enter NATO. And in the end, if they get this peace agreement … that’s probably going to be the case anyway … that Ukraine will promise to be neutral.” 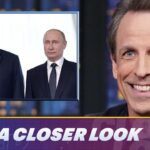 Kilmeade was significantly less interested in negotiating with a hostile invader.

“Well, I’ll tell you what: You can never give in to what Russia wants other nations to do,” Kilmeade said. “They’re going to decide whether [Ukraine goes] into NATO or the European Union, when [Ukraine is] a European society that wants that?”

Campos-Duffy tried to gently push back by zooming out to the bigger picture: “We have a Monroe Doctrine. And I think we would be very concerned about this kind of action in our hemisphere. … The main problem here is still China. And now we’ve created a bigger bloc, China and Russia together. This is why our policy makers aren’t thinking long-term — provoking this war … .”

And it was at “provoking” that she lost Kilmeade altogether.

Then, when Campos-Duffy referenced the “red line” that Russia had drawn over Ukraine …

See the entire exchange in the video above.