You’ve got to hand it to young actor Tye Sheridan — just shy of his 19th birthday, he’s already received acclaim for his heartfelt and honest performances in powerful films like “The Tree of Life,” “Joe,” “Mud” and “The Stanford Prison Experiment.” With his latest, “Scouts Guide to the Zombie Apocalypse,” Sheridan proves he can still act the crap out of a movie, even when crap is all the movie has to offer.

“Scouts Guide” — shouldn’t there be an apostrophe in there somewhere? — wants desperately to be the horny-American-teen version of Edgar Wright‘s Cornetto movies like “Shaun of the Dead” and “The World’s End,” where genre tropes exist merely to buttress a film about friendship and moving forward in life, but it fails as a horror-comedy, since it never manages to scare and musters only two or three decent sight gags.

When a major studio (in this case, Paramount) dumps a horror film into theaters on Oct. 30, it’s pretty much a guarantee that no one is expecting the title to generate much of a second weekend. Gullible teens aside, it’s not clear who’s supposed to show up for that first weekend, either.

Ben (Sheridan) and Carter (Logan Miller, “Night Moves”) are tenth graders who are starting to feel embarrassed about being “scouts” (the Boy Scouts of America name and logo are nowhere to be found here, no doubt to the group’s relief), but they persist at it out of loyalty to their pal Augie (Joey Morgan), who has been obsessively racking up merit badges since the death of his father. 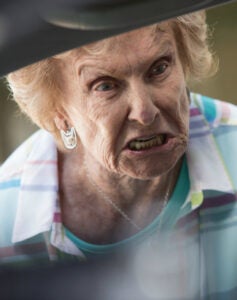 On the night that Augie is to earn his Condor badge, Carter and Ben plan to sneak out to a senior party, but as luck would have it, that’s also the night that a zombie virus spreads through their small town of Deer Field. (A sign informs that they’re 40 miles away from Haddonfield, the setting for John Carpenter‘s “Halloween.” Ha ha.) Horndog ‘s first thought at seeing the streets empty is to sneak into the neighborhood strip club, and the boys are rescued from a flesh-eating ecdysiast and her bouncer through the intervention of Denise (Sarah Dumont, “Don Jon”), a cocktail waitress who’s handy with a shotgun.

A disappointed Augie is reunited with his friends, after all of them have run-ins with their infected scoutmaster (David Koechner), and the group must find the secret address of that senior party so they can rescue ‘s sister Kendall (Halston Sage, “Goosebumps”) — on whom Ben has nursed a crush for years — before the military starts dropping bombs on the town.

The screenplay (credited to Landon, Emi Mochizuki and Carrie Evans), to its credit, rushes from one set piece to another, but when it stops long enough for its characters to reveal their feelings or to crack wise, you can feel the gears grinding. The three male leads muster a reasonable amount of chemistry, and any of their on-set lunches probably offered more funny lines.

It’s a bit disappointing that the women here are so leeringly objectified, given that Landon is an gay filmmaker; the one exception is Cloris Leachman, playing a crazy neighborhood cat lady who, once zombified, is subjected to indignities that a smarter movie might have gotten away with, but here they just come off as vandalism to a national treasure. Of the comedians in the cast, the only one who gets a genuinely memorable moment is Drew Droege, as a drunk whose passion for pop music remains alive even after he’s undead.

Too often, “Scouts Guide” revels in juvenile gags involving poop and penises, but you can see shards of the film it might have been, whether it’s in one of Sheridan’s genuinely heartfelt speeches or in the hardware-store montage where the boys suit up for battle. Alas, somebody bit that movie in the neck and then spit the chunks by the side of the road.