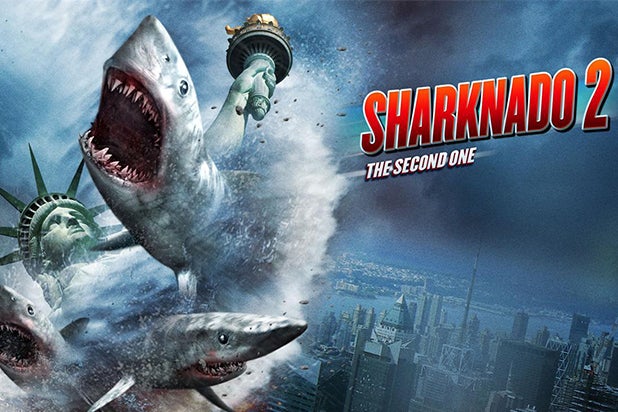 “Sharknado 2: The Second One” just took a big bite out of the Nielsen ratings sheets.

The Syfy phenomenon pulled in 3.9 million total viewers on Wednesday. That number is nearly three times what the original TV movie got in its debut, with the sequel setting a Syfy Original Movie record in the process.

As a result, the cable channel is replaying it on both Saturday and Sunday.

The first “Sharknado” premiered on July 11, 2013, to nearly 1.4 million total viewers. A sequel was greenlit less than a week later.

Due to demand — mostly generated by social media — a second airing of the original one on July 18 scored 1.9 million viewers, representing a 24 percent uptick from the debut.

That time, it ran during an all-day “Sharkathon” festival that also featured “Sharktopus,” “Two-Headed Shark Attack” and “Swamp Shark.” The then-record led to a one-night-only nationwide “Sharknado” screening in more than 200 movie theaters.

It also led Syfy to air the original one final time last August.

“Sharknado 2: The Second One” was directed by Anthony C. Ferrante from a screenplay by Thunder Levin. The re-airings will be Saturday at 7 p.m. and Sunday at 9.