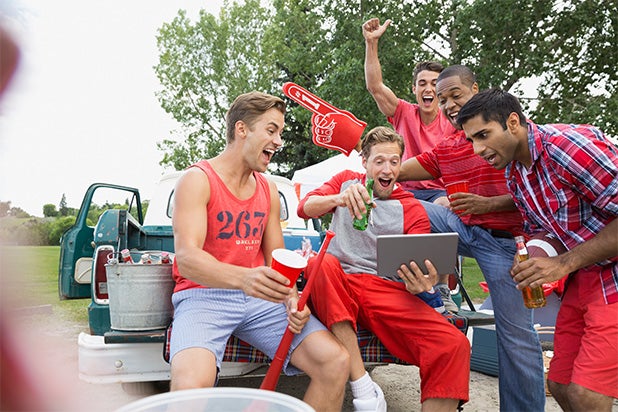 Even though they represent a large and increasingly integral segment of the U.S. sports fan base, Millennials bring to the table a unique challenge. Unlike their Baby Boomer and Gen X predecessors, Millennials follow a much broader range of both traditional and alternative sports as adults. And despite having less time on their hands, they have a far greater selection of viewing alternatives and they do watch … but not in the same numbers as in generations past.

Most notably, Millennials have increasingly bypassed traditional pay TV subscribership — the main staple of sports engagement for years — in favor of untethered media (cord cutting, a trend that is expected to continue in the years ahead). Recent data from ESPN paints a particularly stark portrait: For the fiscal year ending Oct. 1, 2016, subscribership shrank to 90 million, a 10 percent drop in just three years.

We recently conducted a survey of individuals from different age groups and included both avid and casual sports fans in an effort to gauge changes in attitudes and behaviors around both traditional and emerging U.S. sporting events, as well as the way they are covered. As noted in an earlier L.E.K. Consulting study, Cable at the Crossroads: Pondering the Future of Pay TV, increased uptake of emerging digital-media platforms, particularly among younger consumers, has had a noticeable impact on traditional cable TV subscribership, compelling providers to consider new approaches in an effort to keep pace with the perpetually evolving marketplace.

The same holds true for traditional televised sports. As Millennials continue to back away from mainstream media, they are likely to become increasingly disengaged from sports in terms of viewership and fandom — that is, unless industry heads are able to respond to these changes in a proactive manner.

In this multi-week series, we look at the various forces reshaping sports fandom in the U.S. and in particular, we examine how engagement, preferences and trends across traditional and alternative segments (e.g., eSports), as well as emerging platforms (e.g., over-the- top (OTT) broadband internet television), are poised to redraw the map for teams, leagues, broadcasters and marketers/retailers.

In terms of both composition and dollars spent, individuals 35 and older continue to dominate the country’s consumer base. However, at a combined 45 percent, Millennials (ages 17-34) and their Generation Z peers (age 16 and under) are quickly closing the gap. Millennials alone now represent over a quarter of all domestic consumers, and they are the country’s leading life-stage demographic. Coming of age during the rise of the handheld, these individuals have established media preferences that stand in sharp contrast to their Boomer and Gen X counterparts. Unlike those age 65+ whose daily TV allotment continues to rise (currently averaging some 450 minutes of per-day viewing, according to Nielsen), Millennials are rapidly tuning out, with viewership among 18-to- 24-year- olds down 4.7 percent (less than 300 minutes per day) and among 25-to- 34-year- olds down 2.8 percent (around 250 minutes per day) annually since 2010.

Fueling the trend is the ongoing uptake of free online video and paid OTT services, which currently account for some 20 percent of Millennials’ reported total media consumption. By contrast, Millennials spend only 13 percent of their time in front of traditional TV, roughly one-third the TV time allotted by those age 35 and over (See Fig. 1 below). 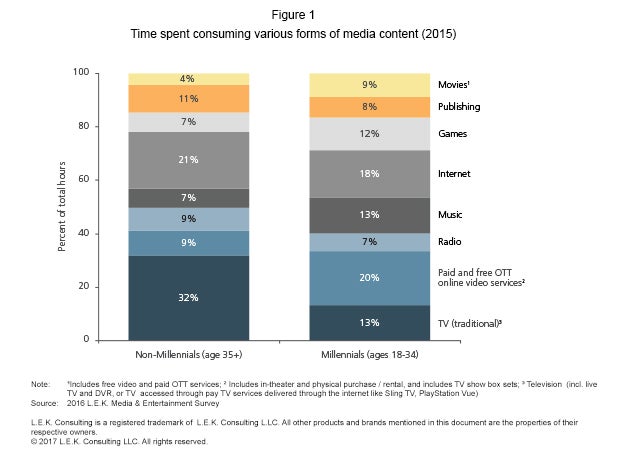 Furthermore, the falloff in pay TV viewership is likely to accelerate among pre-Millennials:

According to data from The Diffusion Group, by 2021 those under 18 are expected to devote a scant five minutes per day to traditional TV viewing, compared with 43 minutes daily for consumers age 45 and over. Given the decades-long dominance of traditional TV in the sports arena, the likelihood of further viewing declines could have a significant impact on sports engagement going forward.

Log in next week as we continue to examine this phenomenon and explore the challenges facing sports teams, the leagues and sports networks in the coming years. Could a “game over” scenario possibly be in the playbook for some of the teams or leagues? Come back next week and find out!

This is Part 1 in a series by Alex Evans, Gil Moran and Dan Schechter from L.E.K. Consulting’s Media & Entertainment practice.