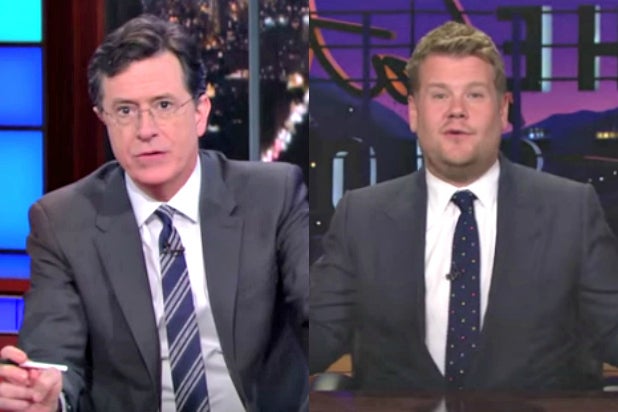 “The Late Show” host Stephen Colbert opened the CBS 2017 upfront presentation with a musical number literally singing the praises of his home network, but then got a little more topical in his opening monologue.

In the brief set, Colbert touched on his program’s recent success in the ratings and his highly contentious — and highly publicized — relationship with President Trump. The comedian took shots at the administration while touching on a number of recent news events, including the firing of FBI director James Comey and calls for an FCC investigation into his late-night show.

Network colleague and “The Late Late Show” James Corden also showed up to introduce his own show to advertisers, taking a few shots at the recent spate of reboots.

See are some of the best jokes from the CBS Upfront:

Colbert on a revealing shot from the opening musical number:
“I’d like to start by being upfront myself, that was a stunt butt. Thank you Scott Pelley.”

Colbert on the recently fired FBI director:
“Welcome to the new star of ‘Criminal Minds,’ James Comey. Every episode is him writing stuff down and getting fired.”

Colbert on “The Late Show’s” recent ratings success:
“I could not have done it without a visionary leader … Thank you, Donald Trump.”

Colbert on covering Trump every night:
“This administration has been just as strange as I imagined it would be. There’s only one word to describe it, and the FCC has asked me not to use it anymore.”

Colbert on Trump’s criticism that “The Late Show” is inappropriate for kids:
“Who says only old people watch CBS … clearly we’re number one in the coveted demo of six-12 year old politically engaged insomniacs.”

Colbert on being the target of attacks from the president:
“I understand if the president doesn’t like my show, but thankfully like his votes on election day, he is in the minority.”

Corden on CBS All Access’ upcoming “Star Trek: Discovery”:
“Who wants another ‘Star Trek’? Great job, CBS. Boldly going where only six television shows and 13 movies have gone before.”

Corden on the number of reboots this season:
“You guys have been here for a week, hearing about all of the new shows, ‘Will & Grace,’ ‘American Idol,’ ‘Roseanne.’ This is like your personal ‘Groundhog’s Day.’ There must be a better way to do this. Can’t we just play the tape from 2002?”