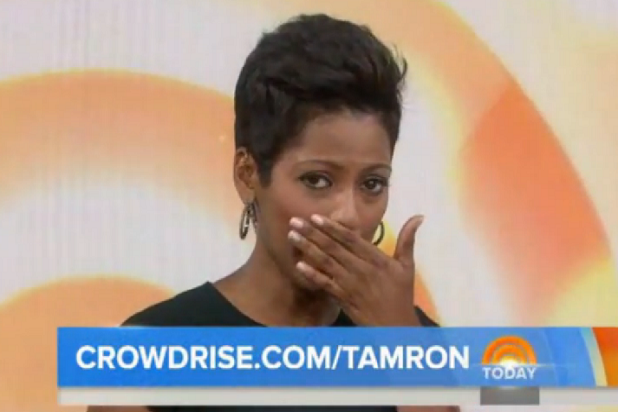 “Today” co-host Tamron Hall had an emotional moment on Monday’s episode, breaking down as she discussed her work with victims of domestic violence.

After a video featuring domestic violence survivors played, Hall attempted to give the website address for her fundraising campaign to help end domestic violence, but found herself unable to do so as she choked up.

Matt Lauer was left to give the web address for the campaign, which benefits Day One New York.

Later, Hall admitted that the issue had an emotional effect on her, but added that her tears are “inspirational.”

“I cry, of course, when you hear these details,” she said. “But my tears are also inspirational, because they are there, they are fighters, and they now, which is a blessing in all of this, want to help someone else.”

Hall has a personal investment in the issue of violence against women. The host has talked in the past about the death of her sister, who was found face-down in her pool. While the death was categorized as an accident at first, a detective later told Hall that her sister had bruises covering her body, and hair was ripped from her scalp. Most of her sister’s fingernails were also gone.

The death has still gone unsolved, though police told Hall’s family that they were pretty sure who had committed the crime.