If you're Team Coco, you couldn't have scripted this any better.

And in case you haven't heard, TBS is Team Coco.

Executives at Conan O' Brien's new network are ecstatic over Thursday's turn of events: O'Brien, who's "Tonight" was only on the air for seven months, was nominated for an Emmy, while Jay Leno was not. 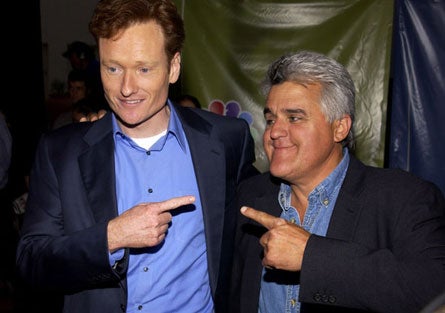 "Everyone at TBS is excited to see Conan get this well-deserved recognition, and we're proud that he'll be joining our network in November," Steve Koonin, president of Turner Entertainment Networks, said in a statement.

It's not normal for a network executive to be this over the moon about a rival network's awards success, but then nothing about the Conan/Jay/NBC saga has been normal.

TBS mounted a tongue-in-cheek Emmy campaign for O'Brien's run on NBC, with the delicious possibility that O'Brien and Leno would square off yet again at this year's Emmy ceremony. And just because Leno was shut out doesn't mean the humiliation is over.

NBC officials have to feel odd about not supporting "The Tonight Show." However, they will clearly be putting all their efforts behind another nominee in the category — "Saturday Night Live" — hoping that it can derail Conan and pick up the Emmy for NBC.

But an NBC spokesperson, in a statement, did take the high road, stating, "We congratulate Conan and all our nominees on their creative accomplishments and their deserved nominations. We wish them all the best when the Emmy Awards are handed out on August 29.".

Conan himself commented via Twitter, tongue-in-cheek, saying, "Congrats to my staff on 4 Emmy nominations. This bodes well for the future of The Tonight Show with Conan O'Brien."

Other nominees in the category include "The Colbert Report," "Real Time with Bill Maher," and "The Daily Show with Jon Stewart."

"The Daily Show," the incumbent, has won the award for several years in a row. But just the fact that O'Brien was nominated by the Academy voters indicates that he may give "The Daily Show" a run for its money this year.

While NBC did nothing to promote O'Brien for the nomination, TBS launched a print campaign that included full-page ads in the Hollywood trades and some of the major daily newspapers.

One ad pictured Conan standing with the words: "Give this man one more thing to tweet about." Another, poking fun at his pale complexion, read, "For Your Consideration, Outstanding Achievement in the Use of SPF 150."

The bad blood between Conan and NBC arose after NBC first gave Conan the host post at "Tonight" when Leno moved into prime time with a nightly show at 10 p.m. But after Leno failed to draw a sizable audience, NBC moved him back to late night.

NBC wanted to give Leno back his old 11:30 p.m. slot and move O'Brien later, but O'Brien balked,  quit the network after reaching a financial settlement, and signed up to do a late night show with TBS.
When O'Brien returns to late night on TBS in November, his show will begin at 11 p.m., a half-hour before Leno's "Tonight Show" on NBC.