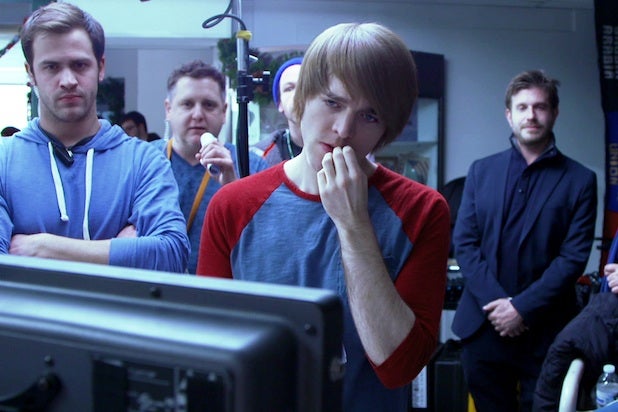 “The Chair” contender and YouTube star Shane Dawson feels that comments made by executive producers of the Starz competition, Zachary Quinto and Neal Dodson, and supporters of his competitor Anna Martemucci and her film “Hollidaysburg” were unfair and unprofessional.

“I knew this was going to happen,” Dawson told TheWrap of Team “Hollidaysburg’s” “hate campaign,” as he described it.

Last week, TheWrap posted a guest blog from Dodson which detailed his extreme dislike for Dawson’s movie “Not Cool” and why he felt that “Hollidaysburg” should win the competition. And last Saturday’s episode showed Quinto’s disgust with Dawson’s film. He and Dodson ultimately decided to pull their names as executive producers on “Not Cool” and said they wouldn’t participate in its promotion.

“I think it became really personal and I think Neal wanted to do anything he could to get her to win,” Dawson said. “I chose not to publicly fight back, because I’m a professional and I’m classy and I’m not going to stoop to that level. And frankly, I don’t need to. I really think I made an incredibly entertaining movie. It may not be a critics’ pleaser, but it’s the audience pleaser I wanted to do.”

Created by Chris Moore (“American Pie,” “Good Will Hunting”), “The Chair” gave both Dawson and Martemucci the opportunity to make a movie based on the same script with an $850,000 budget, final cut decision and a $250,000 prize for the winner of a vote by those who watched both films. The winner will be announced on Saturday’s finale.

Before joining “The Chair,” Dawson was already “internet famous,” as he calls it, for his parodies and sketches on his YouTube channel, which has more than six million subscribers.

TheWrap spoke with Dawson in order to give him an opportunity to address the essay we published from Dodson.

TheWrap: I got the feeling that Neal Dodson wanted to publish his essay to help even out the fact that you had so many built-in fans before joining the show. What’s your take?
Shane Dawson: Going into the competition, I heard a lot of talk from the other team saying it was unfair I was part of the show because I had an online following. To that, I would always say it’s unfair that you guys are all friends. Anna has known Zach for a long time. She’s been friends with Neal forever and they’ve already worked together before. For me, it’s already fair. I had an advantage and so did she.

Do you think they insulted your fans?
I think they insulted not just my fans, but anybody who likes the movie. And there were thousands of people who liked the movie that was outside of my demographic. If you go to ‘The Chair’s’ Facebook page, there are some comments from people in their 50s and 60s, from all different races, from all different backgrounds and they said they’re not Shane Dawson‘s fans but they liked my movie and they liked it more than ‘Hollidaysburg.’ [Team ‘Hollidaysburg’] just discounted them. They said, ‘Oh, those people don’t matter. The people that matter are the critics. The people that matter are people who enjoy independent, highbrow, comedy’ or whatever it is.

For me, it was frustrating. They were trying to make people ashamed for watching the movie that they didn’t like themselves. And it’s totally fine that they didn’t like it. I don’t like a lot of movies, but I wouldn’t go out of my way to shame anybody who did like it. Listen, [Neal’s] been completely unprofessional, not just in that blog. If you go on his Twitter, it’s insane the unprofessionalism. Him and the other team. For the last six months, I’ve been cyberbullied, I’ve been getting emails from these people who are pretty rude and I have not fought back. I’m not going to. I wouldn’t stoop there.

Do you believe you made the better movie?
I think in general, neither of us made the better movie. Saying one movie is better than the other isn’t fair. I think my movie entertains a wider audience, because that’s the type of movie I made. I made a mainstream comedy. Is it fair to put those two movies against each other when they’re completely different? Not really.