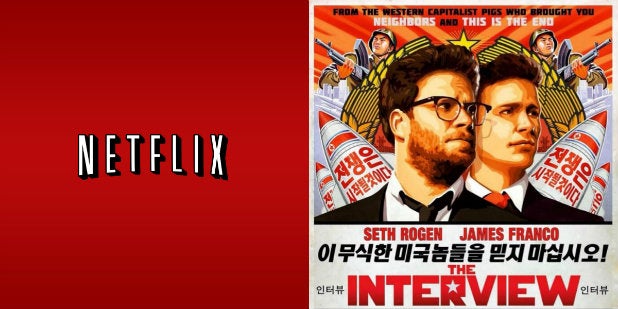 Netflix users said screw the reviews and streamed “The Interview” in large numbers this weekend. But judging by the reaction on Twitter, many people regretted the decision with more a few describing the film as “horrible.”

A Twitter user named Stryker said that while the Seth Rogen and James Franco comedy makes some valid critiques of U.S. policy, overall it “was a really horrible movie.”

The comedy, which angered North Korea for its depiction of the country’s leader, hit Netflix Saturday in the United States and Canada. The film’s debut on the streaming giant followed its limited release in 331 independent theaters on Christmas Day, marking the first time a major studio had opened a movie in theaters and offered it online at the same time.

“The Interview” was originally set for wide release, but Sony scrapped that plan after the nation’s biggest theater chains opted out in the wake of terror threats, purportedly from the hackers who shut down the studio in late November.

As of January 20, “The Interview” had surpassed $40 million from online and on-demand viewings. It’s also made $5.9 million at the box office, raising its total take to $46 million on all platforms. That’s not close to the $90 million that Sony spent making and marketing the comedy, but it’s better than nothing, which the studio was facing when it initially pulled the film.

As for the reviews, the controversial comedy has a relatively weak 52 percent rating on Rotten Tomatoes with TheWrap’s Alonso Duralde calling it “meandering and sloppy.”

The criticism on Twitter was just as harsh, with the hashtag #TheInterview trending throughout the weekend. While some folks genuinely liked it, others were bewildered. We’ve compiled some of the most memorable tweets.

When you watch #TheInterview on Netflix, & realize it's pretty bad: pic.twitter.com/hDP3avJbUm

The Interview – despite making some surprisingly valid critiques of US policy – was a really horrible movie. #nolaughing #TheInterview

So my wife and I watched the first 20 minutes of The Interview on Netflix, and promptly turned it off.

Watching The Interview on Netflix out of morbid curiosity. So far it is terrible.

The Interview is now on Netflix, so I finally watched it. I'll say this – it's not my kind of comedy. I like my comedy to be. . . funny?

After watching "the interview " on Netflix, I'm further convinced the Sony hack was a pr stunt. It's not good enough for a gov to care.

Watched #TheInterview last night. Not impressed. They are very lucky it garnered the attention it did. Without it, total bomb.

#theinterview worst movie of the decade. Dont waist you time on it. Glad it got taken out of the movies. #Oscars2015 #SethRogan