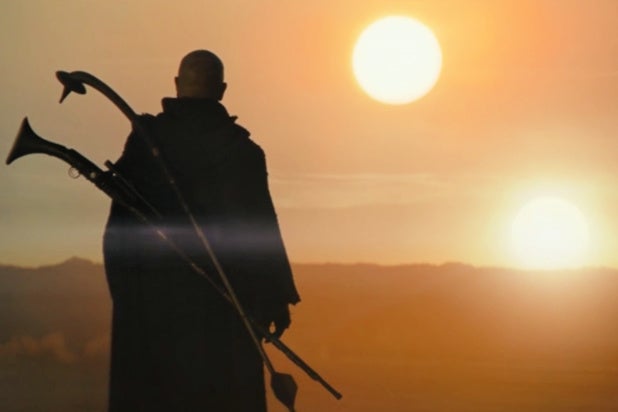 (Spoilers ahead for “Chapter 9,” the season 2 premiere of “The Mandalorian” — the first live-action “Star Wars” series on the Disney+ streaming platform)

“Chapter 9,” the season 2 premiere of “Star Wars: The Mandalorian” on Disney+, was pretty epic by this show’s standards, with probably the biggest action set piece of the entire series thus far when the titular Mando teamed up with a bunch of Tatooine locals to take down a massive legendary krayt dragon.

Baby Yoda didn’t have anything to contribute in this episode beyond reaction shots, but fortunately the other characters filled in nicely — including some decent character work from the Tusken Raiders, who got to be the good guys for once. Though before you get to thinking “Star Wars” has gotten particularly progressive with these aliens, we should note the human characters did repeatedly refer to them as “sand people.” Small steps, though.

In any case, once this story drew to a close, with the krayt dragon defeated and Mos Pelgo saved, “The Mandalorian” gave us only the briefest glimpse of what’s to come — and it’s something that eagle-eyed viewers could probably guess was coming.

That something is the person who showed up at the very, very end of the season 2 premiere of “The Mandalorian”: the Mandalorian.

You may have recognized the armor that Olyphant’s character wore throughout the episode, the Mandalorian armor that the titular Mando (Pedro Pascal) wanted from him. That was Boba Fett’s armor that he wore back in the original “Star Wars” trilogy. And as we’ve expected since the characters oh so brief appearance back in season 1, the man finally showed his face on Tatooine this week.

Obviously, he’s missing his armor, but that was the face of Temuera Morrison — the man who played Jango Fett in the prequels — showing up in the final shot of the premiere episode. Jango Fett was Boba Fett’s dad, sort of — Boba Fett was a clone of Jango, so they’d naturally be identical.

Of course, the last time we saw Boba Fett on screen — chronologically — was in “Return of the Jedi.” After delivering Han Solo to Jabba the Hutt, the Mandalorian warrior spent some time in Jabba’s Palace. When Han’s friends came to the rescue, Boba ended up being knocked by a blind Solo into the sarlacc pitt, where he was supposed to be digested slowly for a thousand years.

Apparently, however, Boba Fett managed to get out. Hopefully, we’ll get to see exactly how he did it this season on “The Mandalorian.”

It’s hard to say when Boba Fett will cross paths with our Mandalorian, but now that he’s shown his face we can bet it’ll be this season sometime. It could be next week, or it could be the season finale — who knows? But regardless, we now certainly know for sure that Boba Fett’s return is finally here.