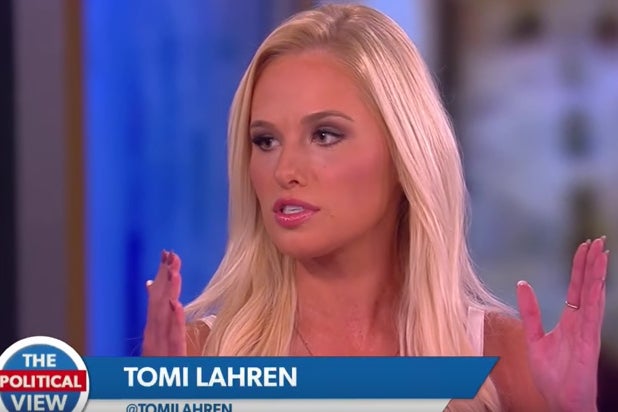 Tomi Lahren on 'The View'

“The View” senior executive producer Hilary Estey McLoughlin thinks the idea of bringing on Tomi Lahren is “interesting,” but that doesn’t mean she’s hiring the former host at right-leaning digital media network TheBlaze. Regardless of what some may presume, the two sides are “not in talks,” McLoughlin told TheWrap when we asked outright.

That’s because McLoughlin is happy with her panel as-is, citing good chemistry between the women and solid personal relationships among the stable.

While McLoughlin did admit that the idea of and case for Lahren is compelling, she said Glenn Beck’s ex-employee is better suited for “The View” as a guest than a panelist — something she did in mid-March. That’s when Lahren told the world she’s pro-choice, shocking some fellow conservatives.

Whether directly or indirectly, Lahren’s comments on “The View” got her benched from TheBlaze and she is now suing her former employer for wrongful termination. According to Lahren’s suit, Beck and TheBlaze knew about her pro-choice views before her public comments and never took issue with them. The lawsuit also claims that a Blaze producer accompanied Lahren to the “View” set and “applauded” her appearance.

The rising star in conservative media will be a free agent once everything is cleared up. She gave her first interview to ABC’s “Nightline” on Wednesday night — also an ABC show. Lahren said she was “deeply hurt” by TheBlaze’s decision to terminate her, but wants to settle the incident in a calm manner.

“I just want to work and have the freedom to put my voice out there  and I want to interact with my fans and my followers. That’s all I want out of this,” Lahren told “Nightline” anchor Byron Pitts. Lahren, a staunch supporter of Donald Trump, appeared to be well received by the liberal crowd during her March appearance on “The View,” but that doesn’t mean she’ll find a permanent home on the show.

“I don’t think we’d want to have someone who is extreme on any side on a daily basis,” McLoughlin explained when we first brought up the idea. “I don’t know if it wears well — not saying Tomi Lahren specifically.”

“It’s not like we’re going to put Ann Coulter on the panel — we wouldn’t do that,” she continued. “And that would get ratings, too, I’m sure.”

Plus, daytime viewers probably don’t relate to the young right-leaning libertarian — and that’s important for McLoughlin’s show. “They want to feel like [the hosts] are their friends,” she said of “The View” fans.

It will be interesting to see where Lahren lands but her 4.2 million Facebook followers, 694,000 Twitter followers and countless viral videos indicate she’ll be employed in the near future — whether on ABC or not.