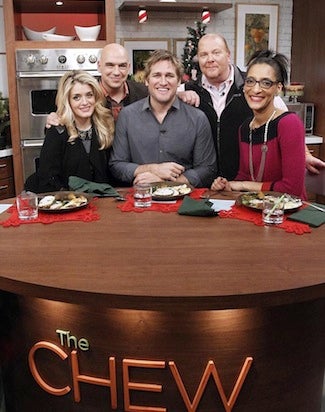 Bravo’s “Top Chef Masters” host has just signed on as the official guest co-host for ABC’s “The Chew.” He’ll replace the regular co-hosts when they’re taking time off. His first stab at the new gig begins Tuesday Nov. 12 through Friday, Nov. 15.

“Curtis brings our viewers a wealth of knowledge about food, cooking and pop culture,” said “The Chew’s” executive producer Gordon Elliott. “He’s demonstrated his chemistry with our viewers and co-hosts countless times during his past visits. Not only that, the ladies loves him!”

Stone, who has appeared numerous times on the daytime culinary show as a guest, said he’s a fan of the series. “All of the hosts are an absolute delight to work with and bring a good combination of food philosophies, ideas and experience to the table,” Stone added. “They each love food and cooking just as much as I do, so I’m looking forward to getting my hands dirty on set to demo my very latest and greatest dishes.”

Curtis published his fifth cookbook, “What’s for Dinner?: Recipes for a Busy Life” in April 2013, which made the New York Times bestseller list.