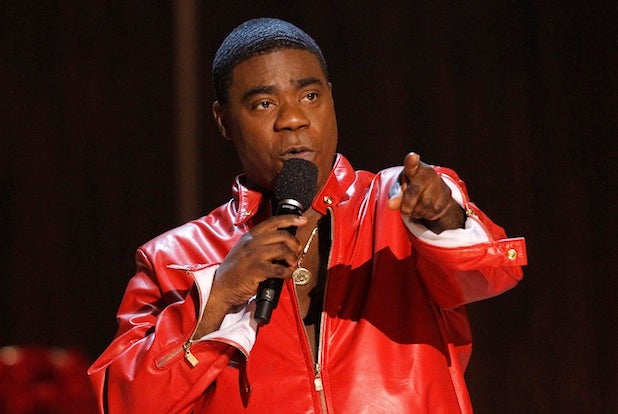 Tracy Morgan is in critical condition after a six-vehicle accident on the New Jersey Turnpike early Saturday. One person was killed and four were hospitalized.

New Jersey State Police Sgt. Gregory Williams told TheWrap that a limo bus in which Morgan was riding flipped over in the 1 a.m. accident, which also involved two tractor trailers, two cars, and an SUV on the New Jersey Turnpike. Police said a truck hit the limo bus, which flipped, and that the other vehicles were caught in a chain reaction. Only those in Morgan’s luxury vehicle were harmed.

The truck’s driver, Kevin Roper, 35, of Jonesboro, Ga., has been charged with death by auto and four counts of assault by auto.

Police identified the passenger who was killed as 63-year-old James McNair, of Peekskill, New York. He was a comedian who performed as Jimmy Mack.

Williams said Morgan and at one other man were flown by helicopter to Robert Wood Johnson University Hospital in New Brunswick.

“Tracy remains in critical condition at Robert Wood Johnson Hospital,” his publicist said in a statement.  “He sustained these injuries in an accident that occurred early this morning as one of several passengers in a chauffeured SUV returning from a tour date in Delaware. His family is now with him and he is receiving excellent care. We don’t anticipate much of a change in his condition today but will provide a further update once more information becomes available.”

Peter Haigney, a spokesman for the hospital, said three patients were in critical condition and one was in fair condition. He declined to release their names.

Williams said there was no preliminary indication that alcohol or drugs were involved, but that a full investigation was underway.

Morgan, of “Saturday Night Live” and “30 Rock” fame, had performed Friday night at the Dover Downs Hotel and Casino in Dover, Delaware.