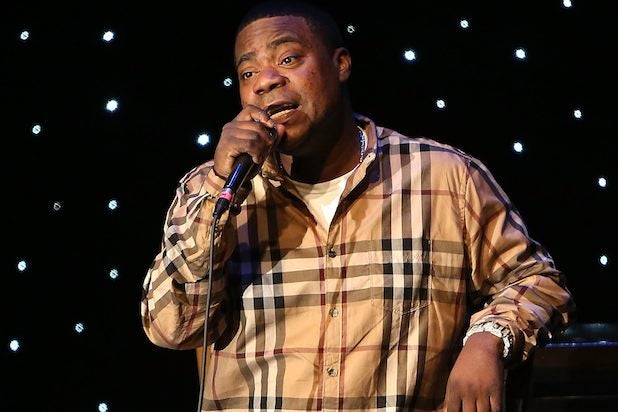 Prayers and good wishes poured in for Tracy Morgan on Saturday after he was hospitalized in a serious car accident.

Morgan was in critical condition after his limo bus flipped in an accident involving six vehicles on the New Jersey Turnpike around 1 a.m. One person, who has not been identified, was killed, and seven people including Morgan were hospitalized.

Prayers to all of those involved in the car crash this morning. Stay strong Tracy Morgan. We love you,” Russell Simmons tweeted.

“Sending prayers and love to @RealTracyMorgan & all injured in the NJ accident. I’m pulling for you brother,” wrote “Psych” actor Dulé Hill.

Jay Mohr, like Morgan a “Saturday Night Live” alum, noted the severity of the accident.

“I’m from NJ. For the Turnpike to be closed for hours is incredibly, frighteningly rare,” he tweeted. “I love you @RealTracyMorgan. No more comics, God.”

“Say a prayer for my man @RealTracyMorgan,” added Mike Epps.

“Saying a prayer for @RealTracyMorgan. He was a guest on @ESPN_Numbers a few weeks ago. Very sweet and talented person,” she wrote.

“Hoping for the best for Tracy Morgan and condolences to the family and friends of the yet unnamed person who was killed,” wrote Andy Lassner, executive producer of “The Ellen DeGeneres Show.”

Since Lassner’s tweet, the man who was killed has been identified as 63-year-old James McNair, of Peekskill, New York.

Comedian Jim Norton shared an inside joke with Morgan: “I look forward to @RealTracyMorgan grabbing my hand and smelling my fingers again as soon as possible. Hoping he’s alright.”

“Community” actress Yvette Nicole Brown offered prayers for Morgan and “condolences to the family of the person who lost their life.”