CNN, MSNBC and Fox News devoted most of their Friday evening coverage to Walter Cronkite, the legendary newsman and iconic CBS anchor, who died at the age of 92 at his New York home.

The network, on which Cronkite became the "most trusted man in America" during his 20-year tenure as evening news anchor, announced his death at 8:13 p.m. ET during a special report by Katie Couric: "It is my sad duty to tell you that our friend and colleague Walter Cronkite has died."

The major cable networks dropped their regularly scheduled programming to remember the man whose voice is synonymous with some of the biggest events — the moon landing, Kennedy assassination, Nixon resignation, et al — in American history.

Yet in New York, CBS — which called Cronkite “biggest name in television news, the king of the anchormen; in fact, he was the reporter for whom the term ‘anchorman’ was coined” — followed Couric’s 8-minute report with … its regular Friday programming: reruns of "Ghost Whisperer" (starring the likeable Jennifer Love Hewitt), "Flashpoint" and the eyestrain-inducing "NUMB3RS." 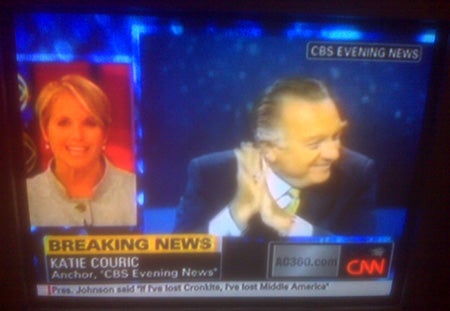 As Cronkite likely would’ve said, that’s the way it is.

Instead, "Larry King Live" and "Anderson Cooper 360" — both guest-hosted by John King — became ground zero for CBS personalities past and present to remember their colleague.

Couric, Don Hewitt, Morley Safer (who said Cronkite was “one of the best men I’ve known to go out drinking with”), Bob Schieffer, Bernie Shaw, Douglas Brinkley (who called Cronkite a “Duke Ellington figure”) and Susan Zirinsky, Cronkite’s former producer, all joined CNN to share their recollections of the newsman, who had been suffering from cerebrovascular disease before his death, according to TVNewser.com.

MSNBC shuffled between Rachel Maddow — who had Dan Rather, who replaced Cronkite on the "Evening News" in 1981, in the studio — and "Countdown with Keith Olbermann" (guest-hosted by David Shuster), which featured comforting call-ins from Brian Williams and Tom Brokaw.

At 10, Fox News dedicated Greta Van Susteren’s pre-taped report on — ironically — the 30th anniversary of the moon landing to Cronkite. (The cultural moment was a landmark in television history, drawing an estimated 125 million viewers — Cronkite with a massive 45 percent share.)

For its 11 p.m. newscast, local CBS 2 news in New York had Couric pre-taped in the studio for an interview about Cronkite. As for the "CBS Evening News"-dubbed intro, which Cronkite taped for Couric, she said: “I think we’ll retire that now.”

Couric added: “It’s a sad night, but in many ways it’s a wonderful opportunity to talk about an icon.”

An opportunity CBS apparently chose to pass on.

CBS, however, appears to be saving its gauzy tribute bullets for Sunday night, when “That’s the Way it Was” — a tribute to Cronkite produced by Zirinsky — is scheduled to air at 7 p.m. ET.