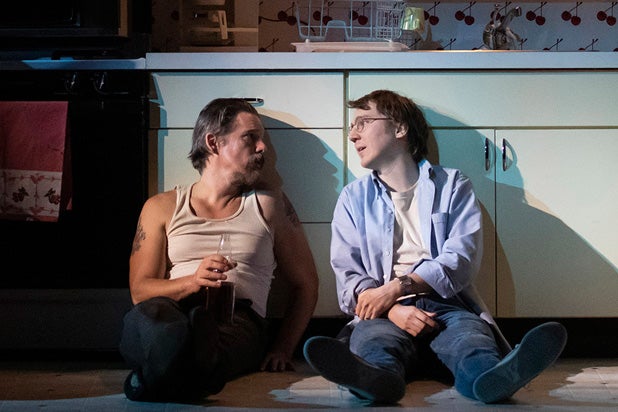 How can one actor be so good and another so misguided in the same production? That bizarre mash-up happens in the Roundabout’s new revival of Sam Shepard’s “True West,” which opened Thursday at Broadway’s American Airlines Theatre. Indeed, how can Ethan Hawke deliver such a grandiose, inspired performance as the bad brother Lee across the stage from a wan, overly ironic performance by Paul Dano that flirts with embodying, but never grabs hold of, the good brother Austin? James Macdonald directs this very unbalanced spectacle.

Hawke nails Lee. He’s the real thing even though he’s playing a great fake, a would-be cowboy who desperately hangs on to some outmoded idea of rugged individualism in a world that no longer believes in John Wayne, much less a true man of the West. Hawke is giving the performance of his stage career, an achievement made even more remarkable in light of his current film work. In “First Reformed,” he essays a man of God who’s as repressed as Lee is out of control.

Dano, on the other hand, camps it up in “True West.” He’s perfectly acceptable in the first act when he’s supposed to be playing the good brother who has a family and is in the middle of what appears to be a somewhat successful filmwriting career. But nowhere in that first act does he give any glimmer of the gravitas that makes him a formidable force against Lee in the second act.

Dano’s is not an incompetent performance in the vein of Madonna’s in “Speed-the-Plow” or Peter Krause’s in “After the Fall,” which also played at the Roundabout’s American Airlines Theatre. Those two actors couldn’t get beyond the basics of making us believe they were doing anything more than reading a script.

Dano has mastered a low-key, naturalistic style of speaking, but Austin is anything but understated in the second act when he challenges his brother for supremacy in their mother’s house, as well as the world beyond. Dano doesn’t make a convincing drunk, which is a real problem for a role that requires his character to be totally smashed for most of the second act. But more serious is his inability to match Hawke’s energy, presence and intensity. Instead of confronting Lee, Dano’s Austin literally flounces. At the end of a line reading, he adds a silly gesture, like flicking his wrist or bumping his hips. The audience rewards him with nervous giggles. He’s playing camp while Hawke’s playing real.

“True West” was last seen on Broadway in 2000 with John C. Reilly and the late Philip Seymour Hoffman. They switched lead roles throughout the run, and there was real logic to that casting legerdemain. They were clearly two bad apples who had fallen from the same tree. Hawke and Dano aren’t even distant cousins.

As the two men’s mother, Marylouise Burke is much less mannered than usual, having almost if not completely retired her pixilated persona here. Gary Wilmes plays to perfection the stereotype of a Hollywood movie producer that Shepard no doubt despised.