Tucker Carlson can’t stop complaining about Democratic Rep. Alexandria Ocasio-Cortez — he’s gone off on her every night since she shared her account of the right-wing insurrection at the U.S. Capitol on Jan. 6. He did it again on Thursday, delivering an angsty and sarcastic rant that had no point or punchline. And he delivered that rant with some visual aids: a weird collection of photos that somebody had digitally inserted her into.

“America has been riveted this week by the tale of a young congresswoman’s harrowing brush with death at the hands of insurrectionists,” Tucker said before his show pulled up a brief clip of Ocasio-Cortez’s Instagram livestream from Monday night.

“As we said, harrowing,” Tucker said sarcastically. “And actually we can’t really take credit for that description because that’s exactly what the rest of the media said too. “Harrowing.” It’s like that one three syllable word occurred to all of us at precisely the same moment. Weird.”

“Tucker Carlson Tonight” then pulled up a montage of TV news anchors using that word to describe the story. Considering that “harrowing” is a perfectly apt description of AOC’s tale, and that there aren’t a ton of alternatives to communicate that sentiment, it’s not really that weird.

After that, Tucker jumped straight to the bad Photoshops and an impressively awful stream of jokes.

“They’ve never met anyone so brave. What they don’t know is that surviving the white nationalist coup d’etat on January 6th was merely Sandy Cortez’s latest feat of death-defying bravery,” Tucker went on disingenuously. That’s when this image appeared on the screen. 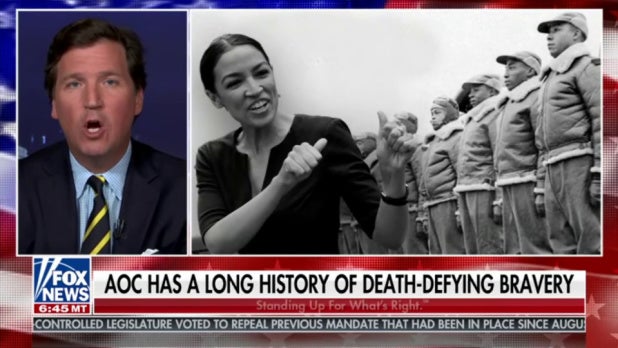 Also Read: Tucker Carlson Talked to Brett Favre About How Great Cheese Is, for Some Reason (Video)

“For the world’s most interesting congresswoman, fleeing for her life from a mob of bloodthirsty terrorists in horned viking hats in downtown Washington — just on the day at the office. She’s been doing that kind of thing for years. It’s what she does.

“Back a long time ago, when America faced off against the last outbreak of global Trumpist fascism, AOC didn’t pause. She put her climate activism at BU on hold and she rose to the call. Sandy joined the famed Tuskegee Airpersons. She flew over 16,000 missions against the enemy. For her work saving democracy, sandy won the coveted Victoria Cross for gallantry. It accented her uniform.”

In addition to the Tuskegee Airmen thing, Tucker also shared with us fake images of AOC being grasped by King Kong, riding a polar bear, and boxing Vladimir Putin. 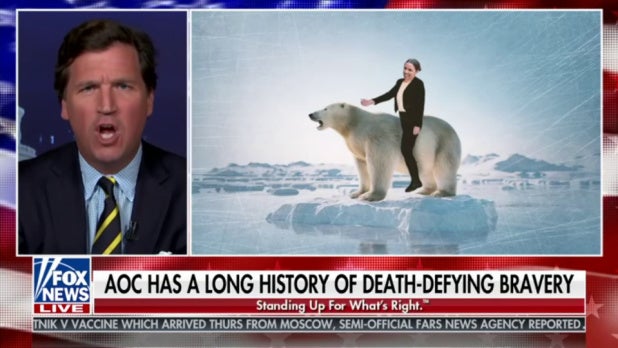 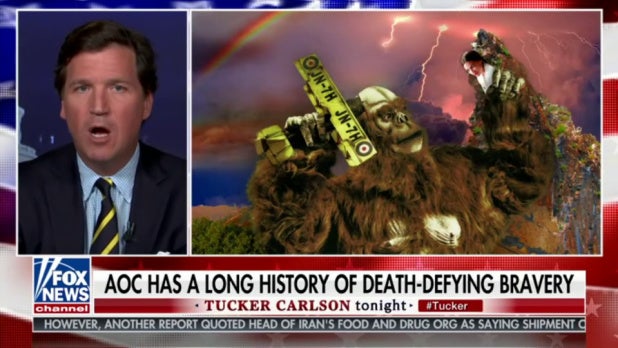 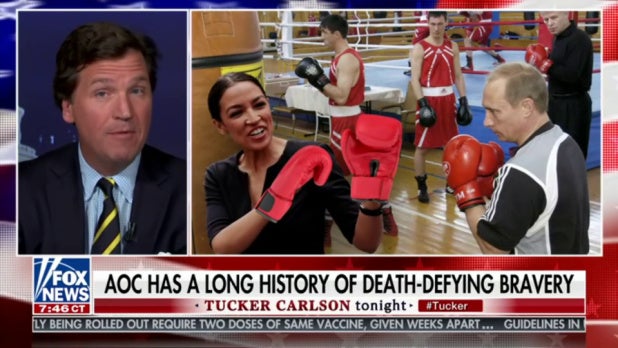 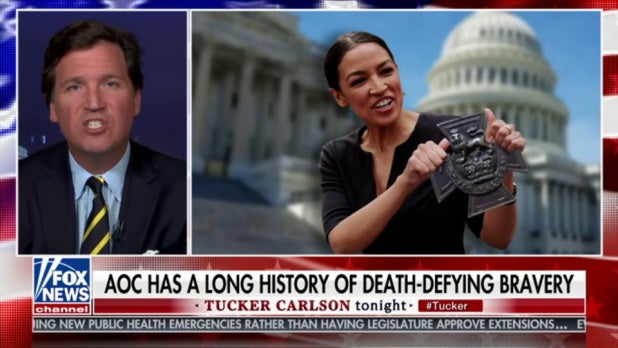 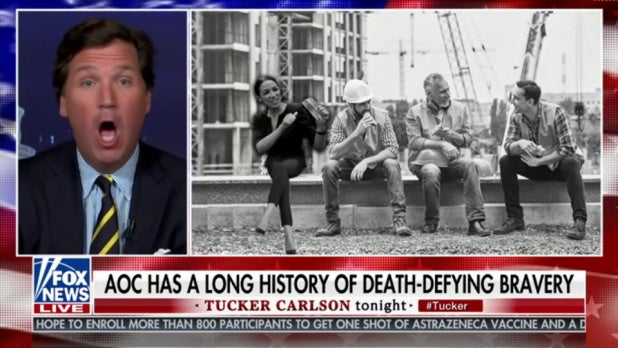 Tucker identified that last photo there as people sitting on a steel girder that is hanging freely — a la this iconic photo — even though it very clearly is just a rooftop.

The joke, if you can call it that, is presumably that actually the attempted coup by Donald Trump’s supporters wasn’t a big deal and so it was silly for AOC to be scared. Nevermind the reality that five people died in the attempt to overthrow American democracy, and that those people were incited by the president, and that at least some of them had murder as their goal that day.

Should you want to subject yourself to this segment for some reason, there’s a video of the quoted portion of Thursday’s episode of “Tucker Carlson Tonight” on Fox News embedded up at the top of this article.