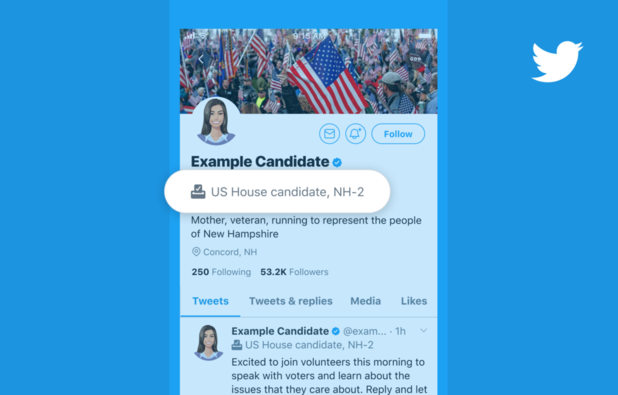 Thursday was a big day for Twitter when it came to politics as the social network announced it is partnering with CBS News on a Democratic debate, verifying primary candidates and bringing back “election labels” on candidate profiles.

Beginning this week, Twitter will actively start identifying candidates who qualify for the primary ballot for the House of Representatives, Senate and gubernatorial races with a verified badge. When it comes to political and social issues, verification can be fraught: Twitter announced in 2017 it was pausing its verification process, one day after Jason Kessler, the organizer of the infamous “Unite the Right” rally in Charlottesville, received a blue checkmark.

Election labels, which appear on candidates’ profiles, tweets and retweets from the candidates, were first launched during the 2018 U.S. midterm election and contain information like the office the candidate is running for, the state the office is located in and more, when applicable. According to Twitter, the labels “received overwhelmingly positive feedback from voters and candidates, and they played a prominent role in election conversation: In the week before Election Day, people on Twitter saw Labeled accounts approximately 100 million times each day, and 13% of US election conversation on Twitter included a Tweet with an Election Label.”

The Democratic National Committee announced the dates, locations, sponsorships and partnerships for four Democratic primary debates in early 2020. On Feb. 25, CBS News and the Congressional Black Caucus Institute will co-host a debate in South Carolina. Twitter will be a debate partner.