There is one common modern TV problem that never plagues “Vampire Academy”: The sense that a show’s first season is a bunch of throat-clearing, set-up, and teasing for future seasons. This is a series with a decidedly opposite problem; it’s so saturated with characters, lore, and incident that by the second episode it feels like it’s filling the audience in on a half-season’s worth of previous adventures that they already missed.

Presumably some of these details come from the “Vampire Academy” book series by author Richelle Mead, which was previously adapted into a little-seen 2014 film of the same name. At the time, it seemed like a natural blending of the two biggest contemporary fantasy franchises, filling the void left by the end of the “Harry Potter” and “Twilight” movies: a magical and competitive boarding school from the former, populated by hormonal/sympathetic vampires from the latter. But despite a game performance from a young Zoey Deutch and the occasional glimmer of screenwriter Daniel Waters’ tart sensibility, the “Vampire Academy” film didn’t work as either a standalone movie or a franchise springboard. Now the material has been re-adapted into a TV series—in part, presumably, to accommodate a mythology so vast that it gets its own pre-pre-credits explainer.

Here’s the gist of it, with the understanding that it could easily be filibustered for long enough to fill this entire review: St. Vlad’s Academy is a vampire prep school with a regimented class system, where Moroi (vampire royalty with a mortal lifespan) receive an elite education, while Dhampirs (vampire-human hybrids) are trained as guardians, eventually assigned to protect important Moroi. Lissa (Daniela Nieves) is one of the elites, who returns to the school following the death of her family. Her best friend Rose (Sisi Stringer) is top of her guardian class (at least for the moment). Together and apart, they navigate the social, bureaucratic and aristocratic landmines of their world—made even trickier given a psychic bond that has formed between them. There is further royal intrigue when Lissa is named as a potential successor to the vampire queen early in the season—but will she actually ascend to the throne, will she keep Rose at her side and does Lissa actually want that power? 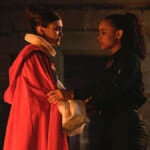 There’s a lot of jargon, rules, alliances, and subplots to figure out, and audiences unwilling to bring outside fandom—or simply roll with the idea that there are two different types of sort-of mortal sort-of vampires who both fear other, more monstrous vampires—may start to feel lost. Or worse; by the time one vampire is referring to another vampire as a (metaphorical) unicorn, casual viewers may throw up their hands. “Vampire Academy” has the kind of taxonomy that needs to be smoothed over by witty dialogue or magnetic personalities, and this is where the eight episodes screened for critics (from a 10-episode first season) fall short.

That’s not the fault of Nieves or Stinger—though they both come across more like driven twentysomethings than uncertain teenagers, they also seem perpetually ready to bite into characterization and dialogue that’s a little juicier than what they get. The best the show can muster is a surprise heedlessness (given the presumed target audience and network-TV sensibility) in embracing TV-MA content, meaning these characters can actually swear like real teens probably would. For the first few episodes, it’s like hearing someone on The CW suddenly drop an f-bomb—which is to say, fun if not especially clever.

As far as post-“Twilight,” next-generation vampire soaps go, “Vampire Academy” isn’t as low-rent as Netflix’s recent “First Kill.” It has a neat variety of sets, from gothic castles to neon-lit clubs; an eclectic mix of oft-outlandish costumes; and the odd unexpected splash of steampunk visuals. The world of the show barely feels lived-in—and, confusingly, has almost no trappings typically associated with a boarding school apart from separating some younger characters from their families—but it can be fun to wander through.

The show is less adept at generating active, ongoing interest in its story and characters, as opposed to their surroundings. “Vampire Academy” works best when it embraces gothic melodrama, whether that has to do with romance, the unshakeable bonds of friends or family, or characters being lifted into the moonlight by a murder of crows. Family drama and teen romance (though sadly not the crows) both figure into one of the better supporting characters, played by “Degrassi” alum André Dae Kim—a Moroi whose parents have chosen become the more fearsome Strigoi (basically, vampires who act more like zombies)

The heartbreak and horror of this detail scans more clearly than any number of backroom vampire-power maneuvers; same goes for the nocturnal excitement of some Moroi forced to journey into the normal human world in a later episode. In these bits and pieces, the characters’ vulnerabilities emerge from beneath their fantastical trimmings (and fantastic outfits). The rest of the time, these vampires aren’t seductive human-monster hybrids so much as walking encyclopedias of “pious rules and sacred bloodlines,” as one of the more irreverent character puts it—which leaves “Vampire Academy” too closely resembling a textbook. 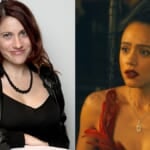