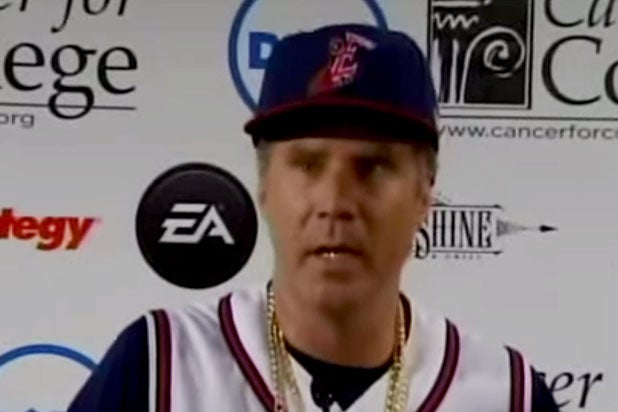 Will Ferrell is stepping up to the plate. And onto the mound. And into the outfield as well.

“Anchorman” star Ferrell will assume every position in baseball in a single day on Thursday, as part of a Funny or Die special that will air on HBO.

See video: Will Ferrell Dragged Out by Security After Drilling Cheerleader in Face With Basketball

The special, which is being produced in partnership with Major League Baseball, will find Ferrell stopping at five different spring-training ballparks in Arizona, playing every position on the field for 10 different teams in the same day.

Ferrell is attempting to recreate the Sept. 8, 1965 feat of Bert “Campy” Campaneris, who went 0-for-3 playing all nine positions for the Kansas City Athletics in a game against the California Angels. Campaneris is expected to be on hand when Ferrell begins his whirlwind tour on Thursday.

See video: ‘Stand Up to Cancer': Will Ferrell’s Ron Burgundy Lashes Out at All the Zodiac Signs

The stunt will benefit multiple organizations dedicated to fighting cancer, including Cancer for College, which helps individuals adversely affected by cancer to receive a college education. Memorabilia from Ferrell’s journey will be auctioned at MLB.com with proceeds being donated to Cancer for College, as well as Stand Up To Cancer.

It’s not Ferrell’s first effort to advance the cause, with the comedic actor having made a relief pitching appearance in a minor league game for Texas’ Round Rock Express in 2010 (pictured above). His one pitch, against the Nashville Sounds, also benefited Cancer for College.

“Spring training affords an appropriate setting where our game can serve as the backdrop for an event that will benefit organizations that fight cancer,” MLB Commissioner Robert D. Manfred, Jr. said. “Will is a big fan of our game, and many of us in baseball — among our clubs, players and our millions of fans — are big fans of his. Major League Baseball is happy to take part in what will surely be a fun and memorable day for a great cause.”

See video: Will Ferrell Joins the US World Cup Team, Threatens to Bite Everyone

Added HBO Programming president Michael Lombardo, “We hope to always be in the Will Ferrell business. This latest collaboration is one of those things only Will could pull off. I can’t wait to see him take the field.”

The special will air later this year.