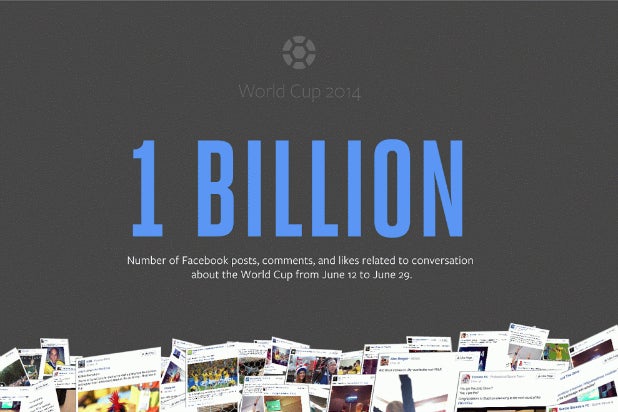 Per Facebook, 220 million users have posted more than one billion World Cup-related posts, comments and likes on the social media giant since the soccer tournament began on June 12.

Facebook generally sees a large amount of conversation around sporting events, but the World Cup is breaking records: Facebook’s data editors have never measured an event — sports or otherwise — that has topped a billion interactions. It helps, of course, when this “event” lasts for weeks at a time.

On Saturday, more than 31 million people had 75 million interactions related to the match between Brazil and Chile alone.  saw the second-highest level of conversation for any World Cup match that Facebook’s data team has measured to date, trailing only the Brazil-Croatia opener, which saw 58 million users post 140 million interactions.

Brazilian players are driving Facebook engagement, too. A photo of Brazilian star Neymar Jr. and The Incredible Hulk has over 2.5 million likes and more than 70,000 shares, making it the most engaging post by any player during the World Cup.

Neymar’s fist-pumping photo after a win over Cameroon on June 23 also has 2.5 million likes. Actually, of the Top 20 most-liked Facebook posts by World Cup athletes during the tournament, a combined 12 of them are by Brazilian teammates Neymar (7) and David Luiz (5).

Lionel Messi made up for four of that Top 20, Cristiano Ronaldo counted for three and Bastian Schweinsteiger had the other one.

On Sunday, more than 19 million people had 35 million Facebook interactions related to the Netherlands’ win over Mexico.