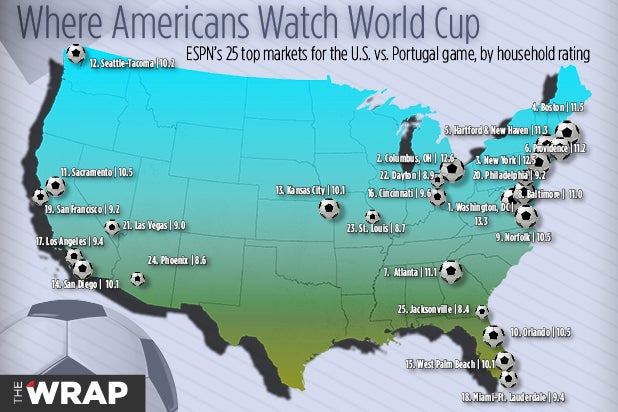 Have a look at TheWrap’s infographic, above and blown up below. Each soccer ball represents one of ESPN’s top 25 markets for Sunday’s thrilling U.S.-Portugal game, which averaged 18.2 million viewers.

You’ll note that almost all the balls are scattered along the coastal states, especially in the densely populated Northeast.

Why? Perhaps because soccer is an international game, and the coastal states are the most convenient places for soccer fans from foreign lands to take up residence. Perhaps they have the strongest ties to the Old World, where soccer is a religion. But we don’t really know.

Washington, D.C., a city teeming with people from around the world, or who often travel in the name of diplomacy and shenanigans, was the largest market, with a 13.3 household rating. (It’s tough to say what that means in terms of real people, because each market is different. Sorry.)

The one place in Middle America where soccer has truly penetrated is Ohio, which we’ll explain in a bit.

Every World Cup — the international competition is held every four years — American fans hope this will be the moment when soccer finally explodes domestically. And each year it gains traction. But as our admittedly snarky graphic shows, soccer isn’t going to replace football anytime soon as America’s national sport, especially inland. (Yes, soccer fans: I know they call it football everywhere else. I’m on your side.)

In Middle America — which people on the coasts generally describe as “everywhere but the coasts” — soccer still barely registers. Sure, our graphic has a few scattered balls representing Phoenix, Las Vegas, and St. Louis, but none of them were among the top 20 markets for Sunday’s game. Two markets that did are Kansas City (No. 13) and Atlanta (No. 7). (Though not coastal, Atlanta is the largest city in a coastal state, for what it’s worth.)

Soccer’s one bona fide heartland success is Ohio. Columbus was the game‘s No. 2 market in the entire country, and two other Ohio markets, Dayton and Cincinnati, also made the Top 25.

The reason? Again, we can’t say for sure. But the last 15 years have made Columbus, Ohio’s capital and biggest city, something of a hotbed for the beautiful game. Columbus Crew Stadium, home of Major League Soccer’s Columbus Crew, was the first U.S. stadium built specifically for professional soccer in the game‘s modern era. Since opening in 1999, it has hosted 10 U.S. men’s soccer team matches, and four consecutive World Cup qualifying matches against Mexico.

Of course, not every Midwestern city can or will build a stadium. But Columbus’ experience shows that the “Field of Dreams” rule may apply: If you build it, they will come. And watch overseas games, too.

Is it fair to make sweeping generalizations about Americans’ viewing habits based on one game? It’s arguable. But we would contend that by focusing on the U.S.-Portugal game, we’re actually being generous, since it was the most-ever viewed match in the United States.

The U.S. has a big game against Germany on Thursday, but it may not be as widely watched as the Portugal game, because it takes place during business hours. (And Americans work a full eight hours, Europeans! That’s why we aren’t as good as you at soccer.)

Portugal’s team also featured Cristiano Ronaldo, arguably the best player in the world. He’s certainly one of the most watchable — Americans are still smarting from his setting up a last-second, tying goal.

Could the middle states embrace soccer if we keep getting games as exciting as Sunday’s? Or if our team keeps doing well?

Of course. But we say that every year.

For those who hate looking at soccer balls (perhaps you live in Nebraska), here are ESPN’s top 25 household markets for the U.S.-Portugal game, followed by the Top 25 markets for last week’s American win over Ghana. As you’ll see, the heartland didn’t tune in en masse for that game, either.