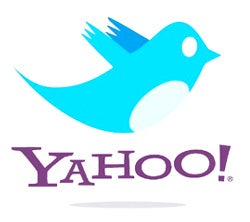 In an effort to amp up its social media offerings — and keep its users from straying — Yahoo has partnered with Twitter.

And like they already do on Google, Twitter’s 50 million daily updates have begun showing up in Yahoo search results. (Yahoo will receive what has Twitter has dubbed its  "Firehose,” a “full feed of public tweets sent to Twitter and our partners every second of every day from all around the world.”)

Twitter co-founder Biz Stone explained the rationale to users on the company’s blog:

“From our perspective, this partnership represents a big opportunity. Tweets may be short, but they have proven over and over again to contain valuable information. As the Twitter information network grows and expands, it becomes more valuable for everyone who participates. Our open approach helps us get closer to providing universal connectivity to a global network of immediate information.”

For Yahoo, the partnership is an attempt to keep its users from straying too far from home. According to Nielsen (via CNET), the average social-networking user spent more than five and a half hours on sites like Facebook and Twitter in December, an 82 percent jump over December 2008.

Google, meanwhile, is trying a similar tact, too, launching its social Buzz service within Gmail.