One of the most prominent themes throught “Younger” is the differences between Millenials and Gen X, which has helped to broaden the show’s audience to those of all ages. But it’s also posed interesting challenges to the cast and writers.

At TheWrap’s screening of the final two episodes of “Younger” Season 2 on Monday, creator Darren Star, writer Dottie Zicklin and stars Sutton Foster and Hilary Duff explained how they often have to learn from each other, because the generational divide can be so great.

For instance, Zicklin said she’s had to learn about Snapchat because it’ll make an appearance in an upcoming episode of the show.

Also Read: 'Younger' Season 2 Teaser Reveals Dolls Have Feelings Like the Rest of Us (Exclusive Video)

Duff, on the other hand, said she suggested the writers explore the app all the way back in Season 1.

“You guys were like ‘No. Snapchat’s not going to stay,'” she said.

“That difference was just interesting to explore,” said Star. 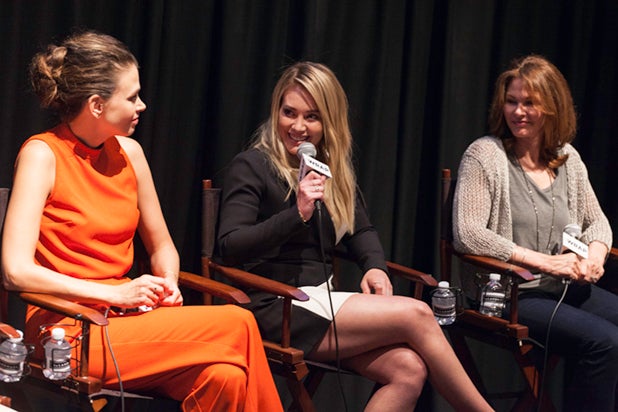 Star also addressed the Thad’s surprising death in Season 2’s penultimate episode, which sees the character crushed by a falling piece of scaffolding after threatening to expose Liza’s secret.

The scene was inspired by Star’s recent fascination with real-life construction accidents, which aren’t that uncommon in the city. So when the writers were looking for a way to end to the character’s storyline, they went with the “outrageous” choice because it made them laugh.

“We thought it was funny,” said Star. “We wanted an interesting way to dispatch with the character.”

The panel also discussed the episode’s elaborate Times Square scene, which saw Foster’s character modeling a fur bikini at the book premiere for the final installment in the “Game of Thrones”-esque series “Crown of Kings.” The scene also featured cameos from “Law & Order: SVU” star Ice-T and NPR’s Diane Rehm.

“That was kind of wild, just to be in the middle of Times Square,” Foster said, noting that filming lasted until four in the morning.

“It was very big,” added Star. “We saved our money for that scene, and it was right in the middle of Times Square, and it actually felt like an enormous premiere. We got a lot of free extras because people were just looking and watching.”