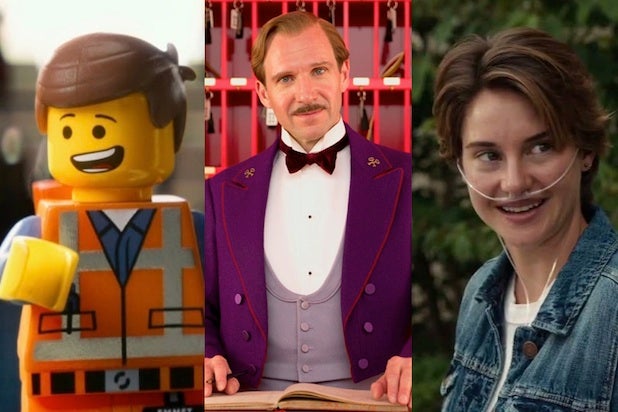 And the Oscars go to …

Those, at least, are some of the potential contenders as 2014 reaches its midway point. But they’re hardly likely to take up many (or any?) slots in the Best Picture category when those nominations are announced next Jan. 15, underscoring just how weighted the Oscar race is toward fall and winter releases.

Of the 42 feature films nominated in any category last year, 35 were released in the second half of the year, and 22 in the fourth quarter. No first-half film made it into the Best Picture, director or acting categories.

But operating under the theory that the first six months of the year can’t be a complete washout when it comes to awards movies, here are 10 films that stand a chance — not always a good chance, but a chance nonetheless — of being remembered by voters six months from now.

“The Grand Budapest Hotel”
Wes Anderson‘s stylish period piece is probably the 2014 film with the best shot at landing a Best Picture nomination; at $58 million it’s the top-grossing film of Anderson’s career, with solid critical endorsement and a 92 percent positive Rotten Tomatoes rating.

But Oscar voters have yet to put any of Anderson’s previous films in the top category, and they’ve never even nominated his movies for production design and costume design, where you’d think he’d be a slam dunk. It may take a strong campaign from Fox Searchlight, and a weaker-than-expected crop of upcoming films, to push this one back into the spotlight. (The huge Lego model of the hotel itself, constructed to publicize the home video release, is not nearly enough.)

“The Fault in Our Stars”
Three years ago, the Academy’s failure to nominate Shailene Woodley for her supporting performance in “The Descendants” was one of the most surprising oversights of nominations morning. The actors branch could make it up to Woodley, who has become a real star as she’s continued to be an unassuming actress with a knack for appearing completely real onscreen.

But while “Fault in Our Stars” has strong grosses to give it a boost, it also has something of a teen-movie stigma to overcome. It’d probably take a few critics’ awards to keep Woodley in the conversation, and a weaker-than-expected Best Actress field for the rest of the year, for voters to give Woodley her due.

Also read: Shailene Woodley’s Message to Miley Cyrus Haters: ‘It’s None of Your Business What She Does’

“How to Train Your Dragon 2”
The Best Animated Feature category is one where first-half releases often show up — and with Pixar not releasing a film this year, the well-received DreamWorks Animation sequel has to be considered one of the favorites not only to be nominated, but to win. (The first “Dragon” film might’ve had a good shot if it hadn’t run into a juggernaut, “Toy Story 3.”)

Still, it won’t be entirely smooth sailing to the Dolby Theatre stage, because of Laika and Focus’ upcoming “Boxtrolls,” Disney’s superhero twist “Six,” and …

“The Lego Movie”
Forget about the connection to a line of toys: “The Lego Movie” has a grown-up, subversive sensibility that could well appeal to more adventurous Academy members. The similarly twisted “Rango,” after all, won in 2011.

Another area where “Lego” has a shot is in the Best Original Song category, where the insanely catchy and deliberately off-the-charts cheesy “Everything Is Awesome!!!” deserves serious attention (that title deserves serious anything).

“Begin Again”
John Carney’s last film, “Once,” was a winner in the song category, and that’s where his new one could be a real contender as well. “Begin Again” is based around music much the way “Once” was, and its songs play a crucial role in fleshing out the characters and advancing the plot.

The key song is “Lost Stars,” which is performed in a delicate, stripped-down version by Keira Knightley and in a lusher, anthemic one by Adam Levine. But “A Step You Can’t Take Back” is at the heart of two crucial sequences early in the film, which may give it an extra boost.

And if I were forced to choose five more from the first half of the year that could be contenders, I’d go for “Transformers 4: Age of Extinction,” “Godzilla” and “X-Men: Days of Future Past” for visual effects and sound editing, “Ida” for foreign-language film and “Code Black” for documentary feature.

But I’d really rather cheat a little by including films that haven’t officially opened yet, but have screened publicly at film festivals during the first half of the year — because some of these may well become serious awards contenders when they eventually open in the awards-friendly months of autumn and winter.

“Foxcatcher”
Bennett Miller’s last two films, “Capote” and “Moneyball,” both landed Best Picture nominations, and this richly textured drama figures to be a real contender as well. Based on the true story of eccentric John du Pont, and his odd relationship with Olympic wrestlers Dave and Mark Schultz, the film won Miller the best-director prize at Cannes — and if the Academy’s Actors Branch can get over its uneasy relationship with comedians, it seems likely to recognize Steve Carell’s distinctly non-comic performance with a nomination.

“Life Itself”
While Miller has a history of Oscar success, documentary director Steve James has a history of Oscar snubs, most famously when his film “Hoop Dreams” shockingly failed to received a doc nod in 1995. But James has now made an affectionate, honest and touching film about one of the biggest “Hoop Dreams” champions, the late critic Roger Ebert.

Affection for Ebert and respect for James ought to land it on the doc shortlist — and the 2012 rule change that expanded the nominating process from small committees to the entire membership of the branch should help it go further.

“Boyhood”
The Writers Branch was the only group of Oscar voters to recognize Richard Linklater’s “Before Midnight” last year, and the only to nominate its predecessor, “Before Sunset.” The branch is likely to also be impressed by this unconventional film, shot over a period of 12 years as one of its lead actors aged from five to 17.

Linklater’s film has already gotten some of the year’s biggest raves from its festival screenings, and the sheer scope and daring of the accomplishment by Linklater and stars Ethan Hawke, Patricia Arquette and Ellar Coltrane may lead to awards recognition — if, that is, voters can accept its near-three-hour running time and its lack of conventional narrative structures.

“Maps to the Stars”
David Cronenberg’s acidic, bitterly funny ode to Hollywood should go down like gangbusters when it starts screening in the town where it’s set. While the film itself is hellacious fun, it might be too light and too weird for Academy voters — but the deliciously bold and twisted performance by Julianne Moore as an aging movie start trying desperately to hang onto a bit of fame will give them a potentially irresistible way to honor an often-nominated, never-awarded AMPAS favorite.

Moore is only one of several performers who could fare better at awards time than the films they’re in will — you can most likely add Hilary Swank in Tommy Lee Jones’ “The Homesman” to the list, too.

“Winter Sleep”
If we’re going to extend this list to films that have screened at festivals, we need to include the film that won the biggest award at the most prestigious fest, right? Nuri Bilge Ceylan’s “Winter Sleep” took home the Palme d’Or at Cannes this year, which means there’s a pretty good chance that Turkey will submit it as their entry in the Oscar foreign-language race.

They did the same for Ceylan’s last film, “Once Upon a Time in Anatolia,” which landed on the Oscar shortlist but fell short of a nomination. “Winter Sleep” is a measured meditation on conscience, and it’s slower, talkier and longer than “Anatolia.” It’s a challenging film that will most likely need the support of the more adventurous executive committee to put it on the shortlist — and one that will most likely get that support.

But with a tiny company, probably not much of a budget for an Oscar campaign, and a new rule that allows everybody to vote in the category without proving that they’ve seen all five nominees, the film is most likely too forbidding to have a real shot at winning.

As for the most critically acclaimed film at Cannes, Andrey Zvyagintsev’s “Leviathan,” it has Sony Pictures Classics in its corner, and SPC has a remarkable track record in the category. But first the film will have to become the selection of the Russian committee that picks the country’s entry — and between the fact that it is reportedly a thinly-veiled attack on Vladimir Putin’s Russia, and the committee’s historic and unfortunate tendency to pick big, blustery movies that go nowhere with Oscar voters, that seems unlikely.