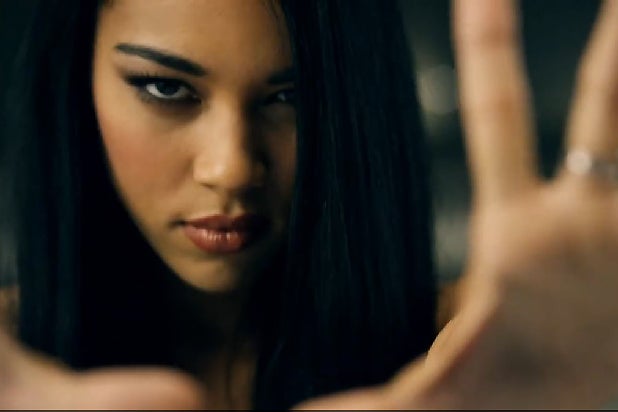 Aaliyah fans will forever wonder what could have become of the performer’s life and career had she not died tragically in a plane crash 13 years ago.

Much like the 22-year-old’s legacy, the Lifetime movie “Aaliyah: The Princess of R&B,” is riddled with untapped potential. Instead of digging deep and edifying audiences about segments of the singer and actress’ life that haven’t been covered in a half a dozen music documentaries and specials, the made-for-TV flick premieres Saturday and is serviceable but non-revelatory.

Alexandra Shipp (“Drumline: A New Beat” and “House of Anubis”) is winsome in her portrayal of the woman born Aaliyah Haughton and is perfectly believable as an ambitious but introverted tomboy on the verge of international fame and acclaim.

Crawford is especially compelling as a mom determined to protect her daughter while helping her pursue her dreams. Meanwhile, Elise Neal (“The Hughleys”) makes a brief but impressive appearance as Gladys Knight.

All of these actors’ performances are especially profound when one considers the awkward and stunted dialogue they had to work with in “Aaliyah: The Princess of R&B.”

For instance, in one scene when Aaliyah tells her mentor and eventual husband R. Kelly (Cle Bennett) — the result of a swift and illegal marriage, since she was only 15 — that he barely acknowledged her during her initial audition for him, he actually says, “You ain’t got to look at the sun to know that it’s shining.”

Yipes! Even if R. Kelly said this in real life — and hopefully he didn’t — it’s up to the writers to wipe away the detritus of warmed over soul songs and give TV audiences words they can relate to and feel. It’s not about securing the rights to every song the woman sang. It’s about crafting a tale that can live on the way Aaliyah’s chart-topping tunes have.

After all, a lot of people idolized the rising star from her hometown of Detroit to England. Aaliyah wasn’t just a R&B singer trying to break into movies. She was an approachable, Grammy-nominated scene stealer who performed at the Oscars. She was one of the big A’s — Aretha, Anita and Aaliyah — to come out of the Motorcity. Sadly, the one or two montages used to convey Aaliyah’s whirlwind career, touring schedule and ever-growing fan adulation don’t cut it either.

While Shipp and Bennett have tangible chemistry as ill-fated lovers — which is more than can be said for the connection-free interactions between Shipp and Anthony Grant who co-stars as boyfriend and music mogul Damon Dash — the bald cap Bennett sports is so detectable and rubbery it’s comedic. Grant also wears a noticeably cheap bald cap. Why didn’t the producers just pay a little extra for a barber who could shave these dudes’ heads?

Sure, this is a negligible detail but it’s the little things that separate well-executed TV movies from glorified reenactments.

If there is one consolation, it’s that all that hullabaloo made over the casting of Izaak Smith and Chattrise Dolabaille as lighter-complexioned, thinner versions of super producers Timbaland and Missy Elliott was much ado about nothing. The two actors only appear in one barely memorable scene.

The thing is that pretty much sums up “Aaliyah: The Princess of R&B” in a nutshell. Despite a handful of great performances, this small-screen drama is a forgettable, overly publicized splash in the pan unworthy of the woman it earnestly but clumsily attempts to honor. What a shame.

“Aaliyah: The Princess of R&B” airs Saturday at 8 p.m. ET on Lifetime.