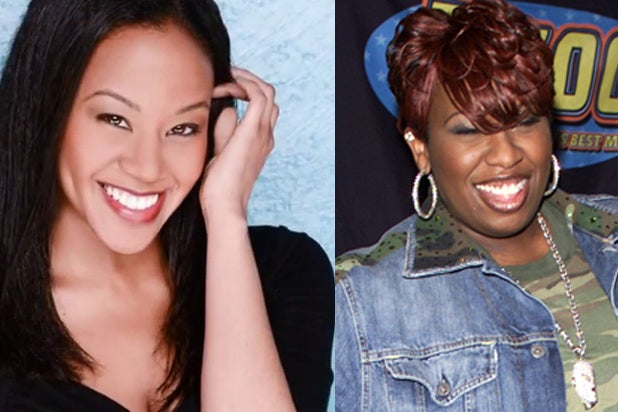 Casting choices for Lifetime’s Aaliyah biopic are once again under attack.

Cries of Hollywood colorism were made after TheWrap reported who had been cast in the roles of Aaliyah’s mentors, rapper-producers Missy Elliott and Timbaland, on Saturday.

The duo worked with Aaliyah on her second album, “One In A Million,” which sold 3.7 million copies in the United States and more than eight million copies worldwide.

Now under the microscope, Canadian singer and dancer Chattrisse Dolabaille will play Missy Elliott while “So You Think You Can Dance Canada” alum Izaak Smith has been chosen to play Timbaland.

Both actors have been considered by many fans and social media users as being “too light-skinned” and “too thin” to play the roles, especially in the case of Dolabaille.

“She is much lighter, she is much smaller and she doesn’t seem to have any Hip-Hop RNB [sic] background. Some feel that the biopic creators didn’t look hard enough for someone more appropriate to play Missy,” wrote The Urban Daily.

The writer said that skin color is the bigger sin here. “Darker complected women of color have been increasingly feeling disrespected by filmmakers as of late because they are not finding themselves represented on the screen as much as they should be,” the writer said.

The production had already weathered a storm of protest after initially casting Disney star Zendaya Coleman in the role of the young R&B star who was killed in a plane crash at age 22 in 2001.

The casting was criticized due to Coleman being mixed race and thus lighter skinned than Aaliyah. A petition was drafted to encourage Lifetime to recast the role.

“Aesthetically, it seems, her bone-straight hair is all that is required to override her prominent Irish heritage,” said a New York Post writer. Coleman exited the project and was replaced by Alexandra Shipp.

Lifetime declined to comment for this article. TheWrap is still awaiting comment from Wendy Williams, who serves as an executive producer on the movie.

Here are a few comments TheWrap readers wrote about the castings of Chattrisse Dolabaille and Izaak Smith:

Kay: So…. has Hollywood abandoned the idea of casting actors who could remind the viewer of the person they are portraying? She’s a cute girl, but there are cute girls who resemble Missy Elliot. Seriously? So if they do an Diana Ross biopic, who will they cast? Kim Kardasian?

Angela: They couldn’t even at least cast someone that is plus sized?

Dre Mosely: LOL. God forbid they cast actual black actors to portray these black people. They seem to be doing their best to find these mixed actors that are “just brown enough.”

Jay: As a young black actress, I am offended. Are they against black talent that is not of lighter skin and mixed? So sad and disturbing, they cant even get an actress who resembles Missy, I guess she does not fit into this horrible colorism casting. I will not be watching. We need to write Lifetime, and get this movie stopped.

Mimi: Although I am happy to see fresh faces I would have liked to see them cast a thicker full lipped chocolate sistah that resembles and has the swag of Missy period. He’ll they could have cast that beautiful lady from Glee and won Dancin with the Stars!! The guy that was cast for Tim is ok.

Here’s a sample of what is being said on Twitter about the castings:

The casting for this Aaliyah movie…colorism is alive & well @lifetime. Wendy Williams is running a #PaperBagTest in casting.

Your casting for the "Aaliyah" biopic is trash. Stop, please. @lifetimetv

I hope Channing Tatum plays Ginuwine in the Aaliyah biopic