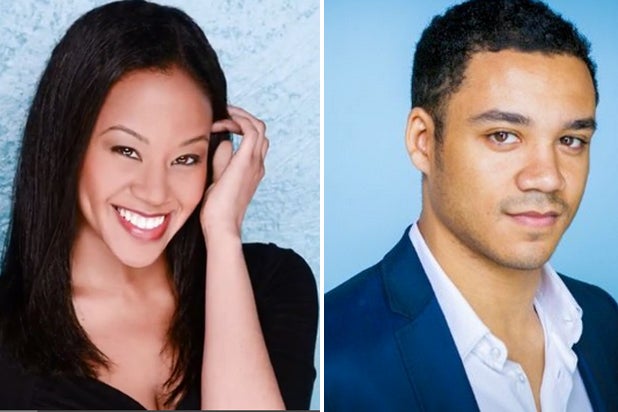 You can’t have a movie about Aaliyah without her musical mentors.

Dolabaille is a newcomer to Hollywood. She’s a Canadian actress, singer and dancer. Watch her video resume below.

Izaak Smith, on the other hand, was a contender on “So You Think You Can Dance Canada.” He has appeared in “Percy Jackson & the Olympians: The Lightning Thief” and “Mirror Mirror” as a dancer. He also played Cal Rice on popular Canadian series, “Tower Prep,” and Danny on digital series “Totally Amp’d.”

Aaliyah worked with Timbaland and Missy Elliott on her second album, “One In A Million,” which sold 3.7 million copies in the United States and more than eight million copies worldwide.

In addition to Dolabaille and Smith, the production has cast Rachael Crawford and Sterling Jarvis as Aaliyah’s parents Diane and Michael Haughton; Lyriq Bent as her uncle and president of her label, Barry Hankerson; Anthony Grant as Damon Dash; and A.J. Saudin and Jesse Sukunda will play the older and younger version of Aaliyah’s brother Rashad, respectively.

The working title for the television movie is “Aaliyah: Princess of R&B” and is based on the bestselling book “Aaliyah: More Than a Woman” by former Time music editor Christopher Farley.

The film will be produced by Aaliyah Productions, Inc., with Wendy Williams, Howard Braunstein (“The Informant!”) and Debra Martin Chase (“Sparkle”) executive producing. Bradley Walsh (“Turn the Beat Around”) is directing, working from a script by Michael Elliot (“Brown Sugar”). It is filming this summer for a fall premiere.

The proposed television movie about the singer, who died in a plane crash in 2001 at age 22, had been mired in controversy with Aaliyah fans and her family expressing disapproval of the project. There was even a fan petition seeking to shut the production down.

Also read: Aaliyah’s Family Speaks Out on Biopic: Lifetime Is the ‘Wrong Forum’

Fans believed that Disney Channel star Zendaya Coleman wasn’t the right choice to play Aaliyah. She would later leave the project. Also, Aaliyah’s family expressed to TheWrap that it was against the movie because they felt it was more suited to the big screen.

Blackfilm.com was the first to break these castings.