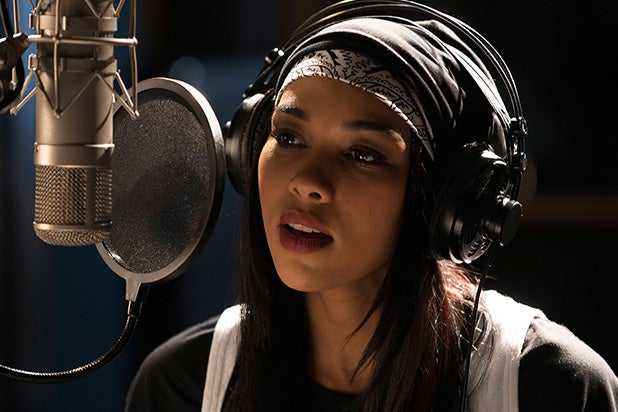 Wendy Williams made it known on Friday that Lifetime’s Aaliyah biopic is back on and has found a new actress for the lead role.

According to Williams’ Twitter, Alexandra Shipp will now play Aaliyah, replacing Zendaya Coleman, who gave up the role in late June.

A Lifetime spokesperson told TheWrap that Williams’ announcement is true.

Shipp is best known for her role as KT Rush on the Nickelodeon show “House of Anubis.” She has also appeared on “Alvin and the Chipmunks: The Squeakquel,” “Switched at Birth” and “Victorious.”

The proposed television movie about the singer, who died in a plane crash in 2001 at age 22, had been mired in controversy with Aaliyah fans and her family expressing disapproval of the project. There was even a fan petition seeking to shut the production down.

According to Lifetime’s announcement, Zendaya had planned to re-record at least four of Aaliyah’s songs. But according to E!, Zendaya left the project amid “production issues, including problems obtaining the rights to Aaliyah’s music.”

When TheWrap spoke to Jomo Hankerson, Aaliyah’s cousin and president of her label Blackground Records, he said that the family was ready to withhold whatever rights it holds regarding Aaliyah from the production.

“Because we control the masters [to Aaliyah’s recordings], the rights and some images of the musical elements that we put together like the videos, and photo shoots and things that we did, what we can do is just withhold those elements from the production, which we would do,” Hankerson said.

Also read: Aaliyah’s Family Speaks Out on Biopic: Lifetime Is the ‘Wrong Forum’

That would make it difficult for the production, but not impossible to gain usage rights to Aaliyah’s songs. Blackground Records owns the recordings of Aaliyah’s voice, but not the publishing rights. So, Lifetime can purchase rights to re-record the singles from the songwriters, which include Timbaland, Missy Elliott and the late Static Major.

The working title for the television movie was “Aaliyah: Princess of R&B” and is based on the bestselling book “Aaliyah: More Than a Woman” by former Time music editor Christopher Farley.

The film will be produced by Aaliyah Productions, Inc., with Howard Braunstein (“The Informant!”) and Debra Martin Chase (“Sparkle”) executive producing. Bradley Walsh (“Turn the Beat Around”) is directing, working from a script by Michael Elliot (“Brown Sugar”). It was set to film this summer for a fall premiere.