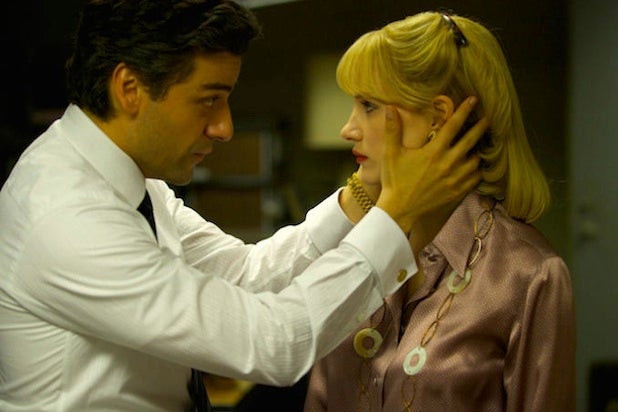 Director J.C. Chandor’s new movie “A Most Violent Year” is set in New York City in 1981, the most crime-ridden year on record — but he’s premiering it far from those environs, at Hollywood’s AFI Fest 2014 on Thursday night.

“It’s my first-ever Los Angeles premiere of any sort,” Chandor told TheWrap about the debut of film, which is being distributed by A24.  “And it’s fitting, because this is a good old-fashioned Hollywood movie.”

Chandor began his directing career with a talky movie about high finance, “Margin Call,” followed by a talk-free movie about sailing, “All Is Lost.” “A Most Violent Year” is another change of pace, featuring Oscar Isaac and Jessica Chastain as a married couple whose New York City business runs into trouble during 1981.

“I’d always been fascinated with mom-and-pop shops, and how some of them remain mom-and-pop shops and others grow to become huge multinational corporations,” Chandor told TheWrap. “What makes that difference?

“A Most Violent Year,” he added, “is essentially about a husband and wife who run a business that is very comfortable. When the movie starts they’re in a great place, but there is something in them that drives them to continue to take risks. They take a massive, massive risk to continue to grow, and from there the movie follows a classic gangster-movie road map.”

While Chastain was attached to the film early on, he added, Isaac’s casting came only after Chandor and Javier Bardem couldn’t agree on the film’s direction. Before the 2013 Cannes premiere of Chandor’s “All Is Lost,” he’d stopped in Madrid to meet with the Spanish actor, expecting to lock in Bardem’s participation, rendezvous with Chastain in Cannes and begin selling the movie there.

But Bardem wasn’t satisfied with the script and wanted Chandor to take it in what the writer-director said was “a more black-and-white direction” – so when he  arrived in Cannes and broke the bad news to Chastain, he was surprised to find her grinning.

“I said, ‘Why are you smiling? I don’t think we have a movie,'” Chandor remembered. “She said, ‘I didn’t want to bring this up before, but there’s this friend of mine from Julliard who I met 15 years ago.’ That was exactly the time when the characters in the movie were supposed to have met. She said, ‘His mom is Guatemalan and his dad is Cuban and it just so happens that he’s here in Cannes in his first big movie, “Inside Llewyn Davis.” And I want you to meet him, because he is this guy.'”

Chandor had to cut the budget to get financing with Isaac instead of Bardem – but, he said, “Amazingly, Participant [Media] stuck with me. And from the first day they walked on the set, Oscar and Jessica had a familiarity that really worked for the movie.”

And while “A Most Violent Year” seems like another dramatic change in a career of them,  Chandor said it’s simply another story he wanted to tell even when he wasn’t sure he’d ever get the chance.

“I’d been waiting to do this since I was 15 or 16 years old, and it almost didn’t happen,” he said. “I’d spent 10 years of my adult life doing commercials and things and trying to get features going, and I had a bunch of near misses. But my career wasn’t happening, my daughter was getting to be three or four and I was in some real financial difficulty during the recession. But I always thought I could do long-form storytelling. I don’t know why I had this blind confidence, but I thought that would be where my skill set most aligned.”

When he finally got the deal to make “Margin Call,” he said, “It was essentially my last shot. And to have it turn out to be a pretty good little movie, my life changed and I had all these amazing opportunities.

“And I had a lot of stories stored up.”