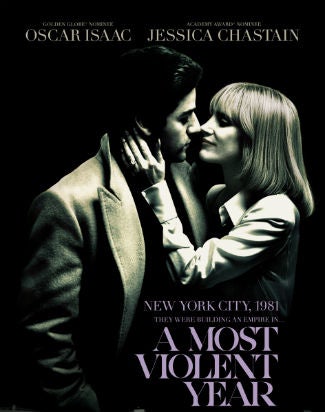 J.C. Chandor’s “A Most Violent Year” starring Oscar Isaac and Jessica Chastain joins the Oscar race with a Dec. 31 release date in New York and Los Angeles, with plans to roll out wide in January 2015.

Set during in crime-ridden New York in 1981, the film follows the lives of an immigrant and his family as they attempt to capitalize on the American Dream while rampant violence, decay, and corruption threaten to destroy all they have built.

Albert Brooks co-stars in the film, which was acquired for domestic distribution by A24 during Sundance. Chandor is producing with Before the Door’s Neal Dodson and Washington Square Films’ Anna Gerb, while Participant’s Jeff Skoll is also involved in a producing capacity.

Participant Media and Image Nation Abu Dhabi are co-financing “A Most Violent Year,” which is Chandor’s third film following “Margin Call” and “All Is Lost.”

See the new trailer below.