The rumbles from an ailing DVD market echoed throughout the sparsely populated hotel corridors at this year’s American Film Market.

The rapid decline of this once reliable cash cow has left many indie film producers scrambling to develop new revenue streams and transition into television, sales agents said as the week-long bazaar closed on Wednesday.

"It’s not a seller’s marketplace anymore," said Travis Stevens, director of acquisitions and marketing for Imagination Worldwide. "It used to be that you could tell buyers, you need this, you need this. That’s not the case anymore, so in this business you never like to see that happen." 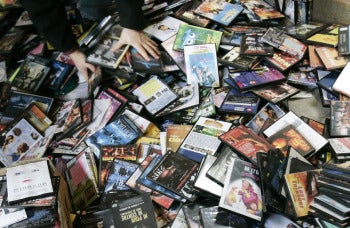 As major retailers close shops and video rental chains like Blockbuster continue to be threatened by cheaper and more convenient outfits like Redbox and Netflix, distributors are finding fewer platforms for their products.

Moreover, fewer and fewer people seem willing to shell out 20 bucks or more on expensive box sets. Blu-ray sales, needless to say, have not done enough to stem the bleeding.

"There were three major parts to this business — television, theatrical, and DVD. One of those collapsed, so buyers have less money," said Mar Abadin, head of sales for 6 Sales.

But sellers report that DVD isn’t the only thundercloud. Online piracy and a move by studios to trim the number of movies released each year also have wrecked havoc on the theatrical market.

"I call it the shrinking purse syndrome," said Barbara Mudge, owner of Worldwide Film Entertainment. "Consumers have less money, maybe they’ve been laid off, so they’re not seeing as many movies in theaters or they’re going to view entertainment on illegal sites. That means that legitimate revenues decrease and our buyers’ purses shrink."

The result, she said, is that "those companies still have to fulfill their obligations. So when it comes to the money, they used to have to fill in holes with independent products, there’s no money left and they don’t buy."

"The theatrical market has changed dramatically," said Axel Bohm, senior sales executive at SevenOne International. "I’d say in Europe it’s declined by 30 to 40 percent over the past 12 months, but I think we’re starting to see the light at the end of the tunnel."

The film market’s troubles have forced those independent producers who have managed to survive the downturn to develop new strategies. In many cases that’s meant an increased emphasis on pitching to television networks.

"Television, those budgets have indeed come back," said Mudge. "As an independent producer, I have to make sure that any film I have is sellable in all media, that it’s not something that is only going to air after 10. My movies may not go theatrical, so they better be able to play at any time slot. They have to play at 3, at 6, or at 10; it’s great if there are no restrictions because there’s nothing objectionable."

Those companies that had made the transition to television seemed more optimistic about the market than those that remained firmly entrenched in the theatrical world.

"It went well, largely because we saw where the market with DVD was going, and we concentrated on our TV product," said Stevens.

For those companies that were not as heavily invested in the television business as Stevens and Mudge, the solution was to get continually specialized.

In the case of Nikkatsu Corporation, it was Sushi Typhoon, a new label devoted entirely to extreme-gore action. It proved to be a hit with buyers, and its first offering, "Alien vs. Ninja," was able to line up several key markets before the bazaar closed.

"The DVD market has become very specialized," said Tomohiro Hayashi, head of operations, North America, for Nikkatsu. "I’m not sure what it’s like in the United States, but internationally, there’s more interest in genre titles."

Investors, many of whom have seen their own profitability decline precipitously, are no longer as free and loose with cash as they once were.

"They are not taking risks in films anymore," said 6 Sales’ Abadin. "Buyers are only interested in low cost, small budget films or high budget films with names. There’s no market for mid-range films."

Though AFM’s managing direct Jonathan Wolf touted the influx of new buyers in his introductory remarks to press at the market, he did admit that the free-spending days were gone and that attendance levels would probably readjust to 2004 levels.

While not exactly funereal, the lack of congestion at the Loews and Le Merigot hotels in Santa Monica affected the mood of distributors and producers, who remembered fondly when the beachfront hotels were filled to overflowing.

"It used to be you couldn’t get into eat at the restaurant in the lobby, now you can get a table for 10," said Leslee Allmon, vice president of worldwide distribution services for Showcase Entertainment.