Editor’s note: Due to an error in information provided by NBC, an earlier version of this story said Friday’s “Tonight Show” episode had its largest viewership for the show overall since Feb. 5. Following a clarification on Nielsen data, the story now correctly states that it was the “Tonight Show’s” largest audience for a Friday telecast since Feb. 5. 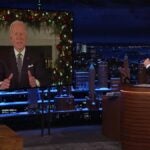 Among the advertiser-coveted adults 18-49 demographic, Friday’s episode of Fallon’s “Tonight Show” — which also included guest Jodie Turner-Smith and a performance by musical guest Rick Ross ft. Jazmine Sullivan — earned a 0.28 rating, its highest number on a Friday in that metric since the Oct. 1 show.

Appearing remotely via video on “The Tonight Show” Friday night, President Biden spoke with Fallon about the state of the country, his approval ratings, and how he’s tackling some of the bigger issues the nation is facing.

But he also had some rather direct criticism of laws being passed in states controlled by Republicans that seek to limit, rather than expand voting: “What’s going on now in about 30 states is literally un-American.”

The comments came in response to Fallon asking, “If we talk again, I check in this time next year, what do you hope we’re gonna be talking about?” 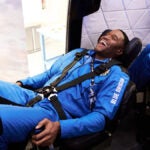 Also Read:
Michael Strahan Becomes First US Journalist to Travel to Space on Latest Blue Origin Mission: ‘Wow, Is All I Can Say’ (Video)

But “the other thing,” Biden continued, “I really hope that we’re going to be able to demonstrate that we’ve made worldwide progress on the environment. Because I think it’s a critical thing. And pray to God, pray to God we will have passed the John Lewis Act and the Voting Rights Act because what’s going on now in about 30 states is literally un-American. It’s about trying to prevent people from voting, rather than allow them to vote.”

NBC’s “The Tonight Show” is filmed in front of a live studio audience at Studio 6B at 30 Rockefeller Center in New York City.