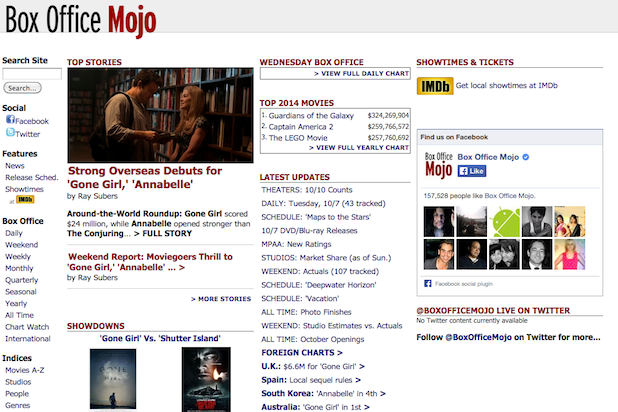 Box Office Mojo has reappeared just one day after it was mysteriously redirected to parent site IMDb.com.

TheWrap was first to report Friday that Box Office Mojo website had been shut down, and was sending users to the box office page on the movie database website.

Representatives from IMDb.com still have not offered any official comment or explanation when contacted multiple times by TheWrap via email and phone. There also has been no official word or message posted from IMDb or Box Office Mojo’s official Twitter accounts as of the time of this posting.

Box Office Mojo was acquired by IMDb in 2008 and on Friday appeared to be absorbed by its parent company, which itself is owned by Amazon. At the time of its sale, Box Office Mojo said it would remain a standalone company.

The disappearance of the site was the subject of speculation among many industry insiders since Box Office Mojo is a critical tool for movie industry executives in Hollywood who look to the site for real-time box office results and historical and comparative data. It was founded in 1999 by Brandon Gray as a three-person company headquartered in Burbank.

IMDb has a vast collection of data on films, but is lacking in detailed data on box office metrics. It is unknown whether IMDB has future plans to incorporate the Box Office Mojo data into its system. The layout for Box Office Mojo is set up solely for an in-depth look at box office metrics, while IMDb fills many roles, highlighting trailers, movie stills, cast lists and fan commentary.