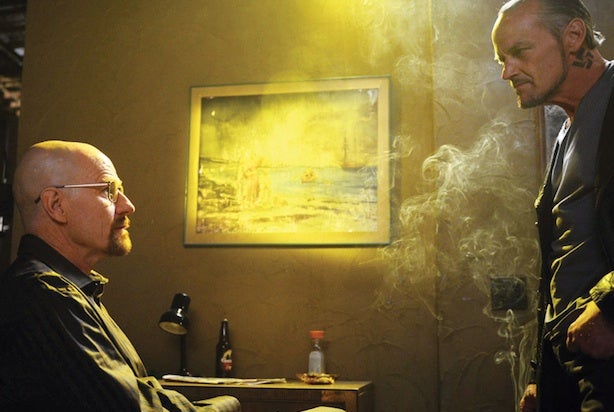 Ever wonder if Walter White’s swan song in “Breaking Bad” had literally been a swan song?

Well, New York City-based One World Symphony is working on an opera inspired by both the show and Percy Bysshe Shelley’s “Ozymandias,” called “Breaking Bad — Ozymandias.”

The mini-opera, set for Jan. 26-27, 2014, is the creation of composer-conductor Sung Jin Hong, and the company said it will explore the question that the drama asked, “Are we all breaking bad?” (That wasn’t the theme that I picked up on, but to each his own.)

The Shelley poem was a recurring motif in the final, bloody season of the AMC series. It was referenced in promos for the show and was the title of one particularly tragic episode. The Romantic poet’s reminder that all glory is fleeting contains the memorable line, “Nothing beside remains. Round the decay of that colossal wreck, boundless and bare. The lone and level sands stretch far away.”

“Cancer became an allegory for evil for the protagonist in ‘Breaking Bad,'” Hong wrote in a blog post. “When Walt White was diagnosed with terminal lung cancer, we the audience emotionally supported him and forgave some of his actions, as they may have appeared to be justified. When the cancer went into remission, an intangible cancer was growing — his hubris and lust for power.”

This is not the first time that One World Symphony has fielded some kooky theatrical efforts. In 2012, for instance, the company performed a flash mob version of “Carmen” at Whole Foods in the Time Warner Building.

AMC  did not immediately respond to requests for comment, nor did One World Symphony, so it’s not clear if the tribute is being done with the support and approval of the team behind the Emmy-winning show.