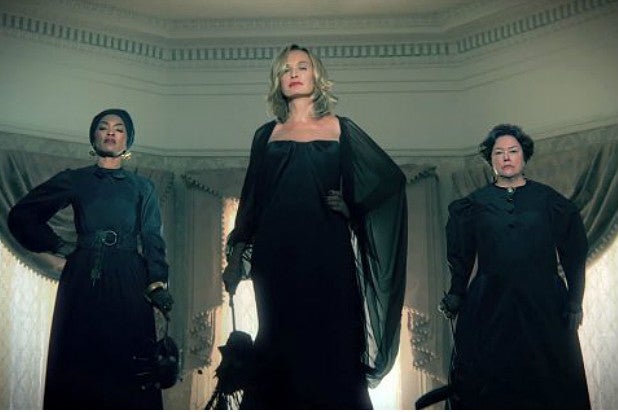 But some questions about the series can be answered — right now, in fact! In an effort to prepare you for the skin-crawling new season, TheWrap presents five things to know about the new season.

1. It’s funny!
Unlike last year’s relentlessly dark “American Horror Story: Asylum” (it was about mental illness, after all), “Coven” — which follows a group of witches as they learn to defend themselves against those who would destroy them — has elements of humor laced into it. Particularly when it comes to Jessica Lange, who plays supreme witch Fiona Goode, and newcomer Kathy Bates, who portrays  Marie LaLaurie, historically known as a Louisiana socialite and serial killer who became notorious for the torture and murder of black slaves.

“[Lange’s] stuff with Kathy Bates, in particular, is very funny,” Murphy told reporters after a screening of the premiere episode earlier this month. “In the second episode, she has an entire scene where she taunts her with a chicken leg, which is quite funny.”

Murphy noted that the levity was deliberately added as a reaction to last season’s constant darkness.

2. You’ll be kept guessing until the very end.
Yes, no duh — suspense,  on “American Horror Story”? But Murphy says that this season will draw out the guessing game as long as possible. “The great mystery of the season is which of these people who you have met is the supreme — who’s going to take Jessica Lange‘s throne?” Murphy revealed. “So the show also has a really great thriller aspect to it this year, which is that you really don’t find out until episode 12 who that is.”

3. Get ready for Franken-Peters.
“American Horror Story” veteran Evan Peters returns once again this year, and while his character seems to die in a crash in the first episode, he ain’t done yet. In the premiere episode, Taissa Farmiga — who plays a young witch with literally killer bedroom skills — takes a shine to Peters’ character, and she won’t let a little thing like death get in the way of romance.

“I’ve always been very obsessed with anything Mary Shelley, so thats another thing that we deal with, Frankenstein,” Murphy revealed. “So in Episode Two, the big girl story is that Emma Roberts and Taissa go to the morgue, because Taissa is obviously in love with the Evan character and they find out that he and a lot of the other boys have been badly, badly mangled and decapitations. And now Taissa decides to build the perfect boyfriend. So she takes Evan’s head and other parts that she desires and creates this thing and they use a spell.”

“I always thought it would be really cool, and I think I might do it this year — the finale airs and then announce at the end of the year what next year’s show is by using some sort of visual thing,” Murphy offered “I think I’m going to try it this year … I think the last image of the season will be, ‘This is what you’re getting next year’ and we’ll announce the title and all that fun stuff.”

5. It’s not all about witches.
Sure, the show is called “Coven,” but you didn’t expect “American Horror Story” to be that straightforward, did you?

While Murphy said that the upcoming season will be a meditation on race relations in America, executive producer Tim Minear revealed some of the other themes of “Coven” at the Television Critics Association press tour this summer.

“I think some of the bigger themes this year are oppression of minority groups of all kinds and minorities going after each other in service of the larger culture,” said Minear, who added that there’s a “very strong mothers and daughters theme.”