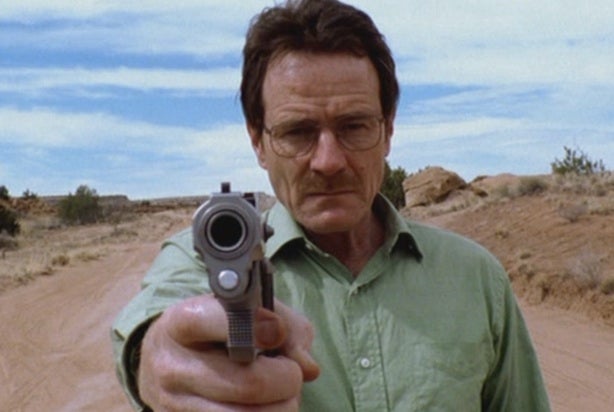 “Breaking Bad” roars towards its bloody conclusion this weekend, but as fans say goodbye to television’s most unlikely drug kingpin, filmmakers should try emulating the things that made the show such gripping fun.

If they’re smart, blue meth won’t be the only gift Walter White leaves behind. Because we’re always ready to help the movie business avoid another “R.I.P.D.,” here are some helpful tips.

1.) Leading Men Don’t Always Have to Be Likable … Or Pretty

The high school teacher at the heart of Vince Gilligan’s tale lies to his loved ones, murders multiple people and makes millions by cooking up batches of highly addictive crystal meth that ruins lives and creates misery. For five seasons, viewers stayed glued to their screens because of Bryan Cranston‘s masterful performance as Walter White, even though most viewers gave up long ago on saving his soul.

Moreover, Cranston — who made himself doughy and bald, and was frequently bedecked in unflattering tighty whiteys (henceforth to be known as “Walter Whiteys”) — was willing to not be movie-star handsome. Thank God. But even when he’s flailing about the desert in his underwear, he remains a charismatic presence.

It’s true that indie flicks frequently offer up protagonists who are morally compromised, but studio executives are loathe to greenlight a commercial film centered on someone who isn’t chiseled, angular and blessed with rippling abs. Let alone a man who poisons children and tucks his button-downs into his Dockers.

2.) A Story Can be Funny, Scary and Suspenseful — Sometimes at the Same Time

“Breaking Bad” defies convention. Individual episodes are masterpieces of slow-building tension that also have laugh-out loud moments. It’s hard to believe that a series that contains plane crashes, drug overdoses and Neo-Nazis could also offer Bob Odenkirk‘s oleaginous ambulance-chasing attorney “Better Call Saul” Goodman or Aaron Paul’s meme-tastic “magnets bitch” line. Then again, this is a show that has a major character lose half his face in an explosion, and calls the episode in question, “Face Off.” High meet low.

Because they need to appeal to the broadest possible audiences, most major films have all their rough edges rubbed off — comedies are purely funny, horror movies primarily scary and action movies are action filled and low-IQ geared.

New Mexico was chosen as a backdrop for Vince Gilligan’s crime thriller largely because of tax breaks. Yet, the show wove the desert landscapes and the state’s distinctive architecture into the story beautifully, adding to its hallucinatory atmosphere.

Productions are hop-scotching around the globe in search of tax subsidies, setting up shop in Detroit or Pittsburgh or Vancouver and refashioning these cities as stand-ins for New York or Los Angeles or some fictional city. But they should take more advantage of locations’ unique features. As the Bond movies proved long ago, film can be an incredible travel guide.

Vince Gilligan and his writing team’s dialogue is pure gold. From Walter White’s imposing “I am the one who knocks” to Saul Goodman’s lethal advice to send Hank to “Belize,” each episode contains lines that are utterly distinctive.  Likewise, the show’s intricate plotting, with seasons flashing forward or backward in time and individual episodes such as “Fly,” set nearly entirely on one meth lab set, demonstrate risk-taking rarely seen on the big screen.

Television prizes the writer. Lionizes writing, in fact. That’s a very different attitude than the director and producer-driven world of movies, where screenwriters are often seen as expendable and armies of script doctors are routinely deployed to perform triage on punchlines or character arcs to meet the whims of movie stars and A-list filmmakers.

Five writers are credited with cooking up the masterpiece that was “Pirates of the Caribbean: On Stranger Tides.” In contrast, it took one writer — Moira Walley-Beckett — to craft this season’s “Ozymandias” (the writer’s room collaborates), which TheWrap’s Tim Molloy said may have been the “best hour of TV ever.” Until the next episode, of course.

5.) Nothing Beats a Musical Montage

Directors like Martin Scorsese and Quentin Tarantino are masters of using pop music to give their films a special flavor and emotional power, but in recent years it has been television, not movies, that has offered up the best soundtracks. “The Sopranos,” “Six Feet Under” and other shows dependably served up memorable musical moments, but when it comes to the montage, nothing beats “Breaking Bad.”

The dazzling “meth cook” set to “Crystal Blue Persuasion” by Tommy James and the Shondells in Season 5 or the juxtaposition of the upbeat “Windy” by The Association playing as a drug-addled hooker services customers in Season 3 are perfect examples of finding off-beat soundtrack choices that make sequences pop. They are funny, sad and memorable. That’s great art.

*Bonus Round: As film itself becomes an endangered species and more directors switch to digital cameras, it’s worth pausing to remember that “Breaking Bad” is shot on film stock. The difference is clear in Michael Slovis’ virtuoso cinematography. The reds of the desert are redder, the blues of the meth bluer, the browns of the White’s drab living room are … well, you get the picture. It’s probably too late to stop film’s abandonment of the glossy stuff that gives the medium its name, but if technology has to leave traditional cameras behind, at least it gets to go out with a bang.