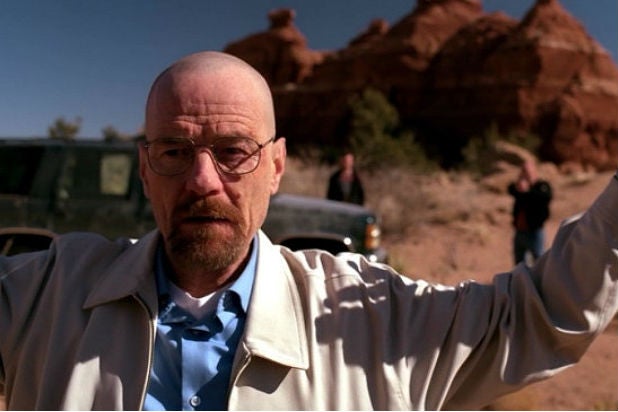 Last night’s “Breaking Bad” may have been the best hour of television I’ve ever seen — beating out the show’s pilot.

I’m not trying to be hyperbolic. The episode, entitled “To’hajilee,” had everything. The sight we never thought we’d see of Walter White being read his rights. A soaring, joyous moment between Hank and Marie. Even jokes, including Saul’s most Saulish line: “Don’t drink and drive. But if you do, call me.”

“Breaking Bad” has always been a chess game, with Walt winning through cold logic. Last night he lost to the two people he has underestimated most: Hank and Jesse.  They beat him even after he cravenly played Brock, his most put-upon pawn. But Hank and Jesse won clean. Best of all, Jesse gained a moral victory by proving that what Walt really cares about most is his money. Hank called his wife to tell her their horrors were over: They had won. There were parallels to Walt’s call to Skyler, after he killed Gus.

And then … they flipped over the board. It turned out not to be a chess game at all, but a gunfight. Pure evil, in the form of Walt’s white supremacist collaborators, looked certain to win by brute force. And cruelty: How grotesque was Jack’s promise to surrender, if Hank and Gomie would show some ID?

The two seemed to make just one mistake, and a big one: leaving no breadcrumb trail into the desert. They clearly trailed Walt as Jesse tricked him into a telephone confession, which means whatever recording they made of it is most likely in their car. Did they call Walt’s arrest into the DEA? It doesn’t seem like they did. So if Hank dies, only Marie will know Walt was involved. Phone records will confirm Hank’s call to her from To’hajilee, but that might not be enough to bring Walt down if every witness is dead, and the recording of Walt’s confession — his real one, not the one from two weeks ago — is destroyed.

Since we left off last night with the deaths of Hank, Gomie and Jesse looking very plausible, Walt may very well be able to escape. But he’s also the only person, apparently, who can save their lives.

The gang needs him alive to cook. So maybe Walt can convince them to stop shooting and let Jesse and the DEA agents live. Maybe, but not likely. Jack and friends don’t like loose ends. Todd shot a child. Would he or his uncle show mercy to agents with whom he’s just been in a shootout?

I guessed earlier this season that Marie would be wearing black by the end of it. I hope not. But the high of her call with Hank seems, from a storytelling standpoint, to heading toward a low.

Of course, this is “Breaking Bad.” It’s writers are obsessed with painting themselves into corners. If Walt could get out of that RV, maybe this situation is surmountable, too.

Walt could redeem himself with a huge sacrifice, threatening to kill himself unless Hank, Gomie and Jesse are allowed to go free. But he was willing to have Jesse killed even before he found out his ex-partner had betrayed him. It’s hard to imagine a complete change of heart now.

There seem to be two other ways for Jesse, Hank and/or Gomie to live. Jesse can speed off in Walt’s car, perhaps forcing part of the gang to chase him and drawing fire from Hank and Gomie. Hank might have a chance then. He took down the cousins, after all. But he and Gomie look desperately outgunned. At some point they’ll need to reload.

Or perhaps someone did call the DEA, and the cavalry is coming in a big way. Or perhaps Hank and Gomie can call for help now, and hold off the gang until it arrives, especially if Jesse creates a distraction.

But I doubt it.

Walt seems to have made a huge mistake by surrendering instead of fleeing into the desert, abandoning his money, and going underground (literally) to build a new meth empire. Maybe he was afraid of losing his family. But turning himself in didn’t seem like a better route to seeing them again, except in court or behind glass. Maybe his plan upon surrendering was to rat out the gang and Lydia, given that they still have an active meth operation, in hopes of entering the federal witness relocation program.

We know from flash forwards that Walt’s journey leads to his vandalized former home, driving a Caddy with an M-60 in the trunk, ricin in his pocket. Many have speculated that perhaps he was returning to Albuquerque after being relocated to New Hampshire. The question was who he was coming home to kill.

The arsenal we – and Walt – saw at To’hajilee suggests that he might be arming for battle with the gang. His firepower isn’t as intense as theirs, but he never wants to be as outgunned as Hank and Gomie.

Does it make dramatic sense for the show to end with a battle between Walt and relatively new bad guys? Not really, unless Hank and Jesse die and Walt sees himself avenging them, in some twisted, self-serving way. Or perhaps by the time of the flash forwards Walt has fallen out with the gang, perhaps over Jesse and Hank being killed, and disappeared. Or perhaps the gang has taken his family hostage to make him cook again.

Maybe the gang is a worthy opponent, if we see Jack and Todd not as mere adversaries but as the personification of pure evil. Walt allied himself with it, and now has to keep it from killing everyone he’s ever loved. It doesn’t seem like a problem he can solve with logic, or even brute force.

Probably none of the scenarios above are even close. “Breaking Bad” creator Vince Gilligan talked on the latest edition of the “Breaking Bad” podcast about the importance of not giving viewers what they expect. So perhaps the entire show will end with the Whites and Shrader’s sitting down to a happy meal at Denny’s.