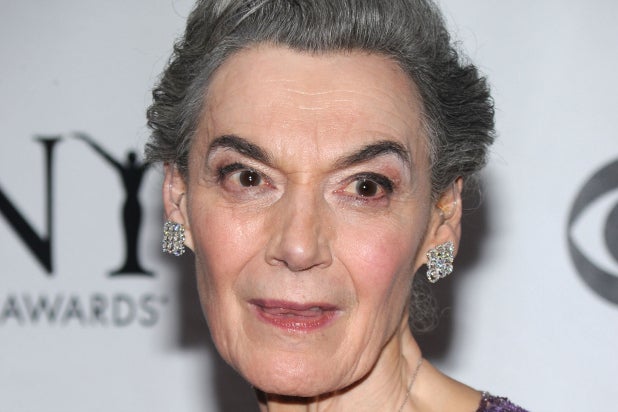 Tony Award-winning Broadway star Marian Seldes, who was larger than life in person and on stage, died Monday night following an extended illness. She was 86.

“It is with deep sadness that I share the news that my dear sister Marian Seldes has died,” her brother Timothy Seldes wrote in a statement. “She was an extraordinary woman whose great love of the theater, teaching and acting was surpassed only by her deep love for her family.”

Seldes, who was defined by her signature booming stage voice that resonated with articulate preciseness to the highest levels of a theater balcony, made frequent appearances in the works of playwright Edward Albee. She appeared in his productions like “Three Tall Women,” “The Play About the Baby,” “Tiny Alice,” “Counting the Ways” and “Father’s Day.”

On the small screen, audiences knew Seldes for playing Candice Bergen’s aunt in “Murphy Brown,” and Mr. Big’s (Chris Noth’s) mom in “Sex and The City.” Most recently, she appeared in an episode of Showtime’s “Nurse Jackie.”

Seldes formerly held the mark in the Guinness Book of World Records for not missing a single performance during her four-year run in “Deathtrap” from 1978-1982 — a total of 1,809 shows. Catherine Russell, who had a perfect run off-Broadway for “Perfect Crime,” later broke her record.

Most recently, Seldes starred opposite Angela Lansbury in Terrence McNally’s “Deuce” in 2007, when the real-life close friends played former professional tennis partners looking back over their storied careers.

Seldes received five Tony nominations during her career, winning for “A Delicate Balance” in 1967. She also received nods for “Father’s Day” (1971), “Deathtrap” (1978), “Ring Round the Moon” (1999) and “Dinner at Eight” (2003). She won a second Tony for lifetime achievement in 2010, which she accepted on stage without saying a word — rather, she simply placed her hand over her heart in gratitude.

After graduating from New York City’s Dalton School, Seldes learned her craft by studying acting at the Neighborhood Playhouse with Sanford Meisner and dance with Martha Graham. She began her Broadway stage career in 1948 in a production of “Madea.” She also appeared in popular productions of Peter Shaffer’s “Equus” (1974), Anton Chekhov’s “Ivanov” (1997) and Neil Simon’s “45 Seconds from Broadway” (2001).

Seldes was married twice — first to writer Julian Claman, with whom she had one daughter, Katharine Claman (they divorced in 1961). She later married playwright Garson Kanin, who died in 1999.

Since news of her passing broke, her fans paid tribute to Seldes on social media:

I am so sad today. We lost one of the most important ladies of the theatre. RIP Marian Seldes. http://t.co/xRPTe6DDH0 We will miss you.

RIP Marian Seldes. An amazing and beloved Tony Award winning actress. Thank you for your talent and dedication to the theater!

Marian Seldes was one of the all-time greats, full stop. Grateful for every magic moment she gave us. [places hands on heart, exits.]

To dear Marian Seldes, a great actress, a greater champion for all artists. Sad to say goodbye, sweet sparrow. You gave us so much.

RIP Marian Seldes. Forever our little bird. Soaring and watching over us from great heights.