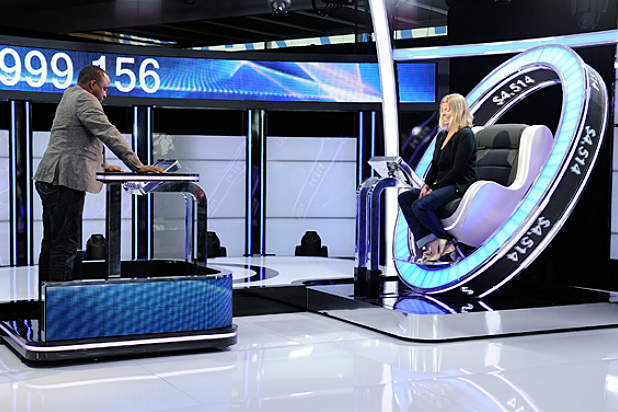 We almost stumped a quiz master.

Eli Holzman, executive producer of NBC’s new “Million Second Quiz,” sat down recently with TheWrap to talk about his round-the-clock trivia show, premiering tonight. Our biggest question: What about drugs? Contestants will face off until Sept. 19, so staying chemically simulated might help.

He quickly recovered: “We are in the process of vetting out all of the rules. It will be a level playing field and I think you’re not going to be able to take performance-enhancing drugs. On the other hand we’re not going to deprive you of your doctor-recommended medication that’s keeping you alive. There’s a balance that has to be struck.”

Contestants will also have to strike a balance on the Ryan Seacrest-hosted show as they decide if they’d rather sleep or cram. Holtzman also explained a few other rules of the show, and how it compares to popular films with Jane Fonda and Arnold Schwarzenegger.

TheWrap: When do contestants sleep?

Holtzman: It’s a judgment about when you sleep. Being well-rested gives anyone an advantage in a game of stamina and endurance. On the other hand, because current events will be the subject of many of the questions – some of the things will have happened in the last 12 hours, 24 hours – bring awake and taking in that information is vital.

And also there’s one hour of the primetime hour that’s a special part of the game where it’s vital to have been playing along with the people that are living on the stage.

How bad is this compared to “The Running Man?”

No one will die. There’s no opera, no ice hockey. It’s a fun game of endurance. It’s a bit strategic as opposed to “They Shoot Horses, Don’t They?” … I don’t think the right strategy will be to exhaust or abuse yourself.

How do you know what questions are interesting to ask?

The questions being delightful is something that we’ve been focused on. They’re the stars of the show in a lot of ways. And that’s writing. We have two teams of writers, one in New York and one in L.A. … They won’t stop until the series has wrapped on the 19th of September. We’ve worked hard to establish a tone and a certain level of difficulty.

Contemporary trivia from the last 24 hours is something we haven’t seen before. That’s only a certain percentage of the questions. But the proof of the pudding will be in the eating.

What if you find that you have a racist contestant? Not that that would ever happen.

It’s life television. It’s live without a net. There’s risk. There’s spontaneity, and there’s all the bad s— that comes along with that. … They’re playing a game that’s really intense and requires and intense amout of focus. You’d have to be a pretty warped person to be blurting out your views on various ethnicities in between questions.

If someone’s harassing someone or creating an environment or running afoul of the law or not conducting themselves in a professional manner, I’d be surprised if there’s not something in the rules that allows you to nip that in the bud.