As she told theWrap at the Governors Awards ceremony in November, Danette Herman is returning to the Oscars to serve as coordinating producer for the 82nd Academy Awards show.

Herman has been associated with the Oscar show for more than 30 years, most of them as the executive in charge of booking and dealing with the talent. She worked her first Oscar show as a college student in 1968, the year the ceremony was postponed for two days after the assassination of Martin Luther King, Jr.

She has worked on virtually every Oscar show since the early ‘70s; she’s booked the stars, attended to their needs and whims, assembled risers full of dozen past Oscar winners for anniversary shows, and kept things quiet when Woody Allen and Christopher Reeve made top-secret Oscar appearances.  During the 1980s, she and Michael Seligman (who also continues to work the show every year) worked closely with director Marty Pasetta to help create the template for how the Oscar production has run ever since. 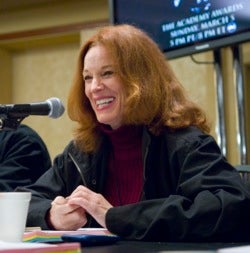 In my Oscar book, “The Big Show,” I described Herman as “a soft-spoken redhead who always knows more than she lets on.”

“Danette is a key ally for Adam and me as we plan out the talent aspects of the show,” said Mechanic. ”She’s a wealth of knowledge and will be a great creative resource for us.”

“I don’t think it’s possible to underestimate the challenges a show the size and scale of the Oscars®,” said Shankman. “Danette is a warrior.”

A specialist in live and taped television specials and events, Herman has served in various capacities on the Academy Awards telecast for more than 30 years. She served as co-producer for the Academy of Motion Picture Arts and Sciences’ inaugural Governors Awards, held in November 2009, and subsequently completed her duties as coordinating producer for “The 32nd Kennedy Center Honors.” Also in 2009, Herman served as co-producer for “The 61st Primetime Emmy® Awards” and recently wrapped work on “CNN Heroes.”

The 82nd Academy Awards nominations will be announced on Tuesday, February 2, 2010, at 5:30 a.m. PT in the Academy’s Samuel Goldwyn Theater.  Academy Awards for outstanding film achievements of 2009 will be presented on Sunday, March 7, 2010, at the Kodak Theatre at Hollywood & Highland Center®, and televised live by the ABC Television Network. The Oscar presentation also will be televised live in more than 200 countries worldwide.