Fox News anchor Tucker Carlson has a history of being a vocal supporter of former President Donald Trump and his followers, but a new report from Politico suggests Tucker might not have actually voted for Trump in the 2020 election.

According to Politico, Tucker has told several guests on his show “Tucker Carlson Tonight” that he cast a ballot for Kanye West in the 2020 race.

We should note right away that it’s unclear if Tucker was just kidding or if he actually did vote for the rapper-turned-occasional politician. Fox News did not immediately respond to a request for comment. 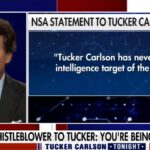 Politico reported that “shortly after the presidential election” last year, Tucker started telling some program guests he had cast his ballot for West.

An anonymous source told Politico that Tucker’s comments are “his way of saying that he’s not just another Trumpette at Fox News like Sean Hannity.”

West spent $10.3 million on his campaign for his “Birthday Party” ticket to appear on the ballot in only 12 states, which basically guaranteed he wouldn’t earn enough votes to become president anyway. He and Trump both lost the presidential election to Joe Biden, but neither has ruled out running again in 2024.

Also Read:
Tucker Carlson Claims a ‘Whistleblower’ Told Him the NSA Is Spying on Him (Video)

During a town hall panel with Hannity on Wednesday night, Trump answered the question of “have you made up your mind?” about 2024 by replying, cryptically, “Yes.” We still don’t know exactly what that “yes” means, since the former president hasn’t explicitly said he plans to run again in the next election.

What we do know for sure is that Tucker actually didn’t vote for Trump in 2016. In a 2017 interview with Business Insider, he claimed he didn’t vote in the election that year at all. At the time, Tucker told Insider, “I never vote so that’s the truth. I didn’t vote this time, I never do.”

Tucker added that he was, at that time, living in the Palisades neighborhood of Washington, D.C. and registered as a Democratic voter: “I’m registered with a party that I sincerely despise because I think it’s really a force for bad in this country and it’s the Democratic Party,” he told Insider. “But I’m registered because I live in the district, it’s a one-party state and the one election I always vote in is the mayor’s race because it matters. I own property there, I raised four children there.”

Last year, Tucker sold his home in D.C. for roughly $4 million and now resides in both Florida and Maine.