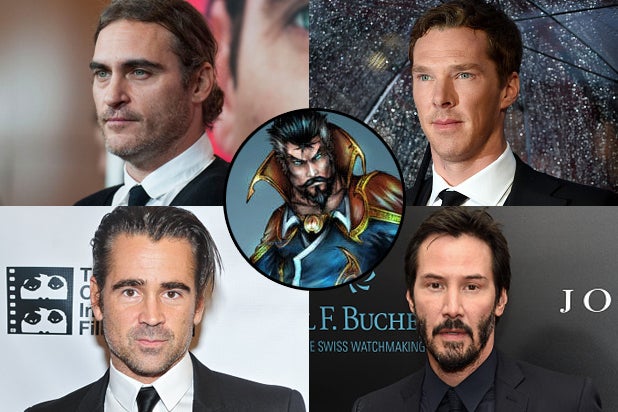 Update 5:15 p.m. PT: Joaquin Phoenix‘s publicist insists the actor’s “Doctor Strange” talks are “dead dead dead. A couple of weeks ago they mutually decided to part ways. It was over before the New York Film Festival.”

Benedict Cumberbatch and Joaquin Phoenix are still very much in the mix to star in “Doctor Strange,” while Marvel is also considering Colin Farrell for the coveted superhero role along with Keanu Reeves, an individual familiar with the high-profile project has told TheWrap.

While Phoenix was thought to have recently passed on the role of Stephen Strange following an extended courtship from Marvel, he has apparently had second thoughts and is not entirely out of the picture just yet. It’s possible that Robert Downey Jr.‘s negotiations for “Captain America 3” and their impact on the future of the Marvel Cinematic Universe could have played a part in Phoenix’s decision to walk away from the project when he did. His publicist did not immediately respond to a request for comment.

The latest actor to join the casting conversation is Farrell, who is preparing to shoot the second season of HBO’s “True Detective.” Marvel has always gravitated towards actors with heat, and the lead in “True Detective” is considered one of the hottest roles on television. Farrell is scheduled to wrap production early next year and could move right into “Doctor Strange” should he be tapped to play the Sorcerer Supreme.

Ryan Gosling’s name was recently thrown into the fray as well, and while he has avoided blockbuster fare in the past, he’s now a father with a family to think of — not that Marvel has backed up the Brinks truck for any actor other than Downey Jr. Gosling also shares a manager with Farrell, whose reps did not immediately respond to requests for comment.

Multiple agency sources have told TheWrap that Cumberbatch remains high on the studio’s list and they were surprised when the actor’s name was omitted from this week’s round of media reports. Marvel has long wanted to be in business with Cumberbatch, who is as hot as ever thanks to the awards buzz surrounding his performance in “The Imitation Game.” However, Cumberbatch’s schedule may prove too tricky to overcome, as he has to film the new season of “Sherlock” and plans to do a play next year. His agent did not immediately return TheWrap’s request for comment.

Meanwhile, comic book fans have urged Marvel to consider Keanu Reeves, whose “John Wick” has been getting rave reviews from the fanboy press, and the studio has been paying attention.

Cumberbatch, Phoenix, Farrell and Reeves are believed to be the four frontrunners at this point, though Jared Leto, Justin Theroux and Oscar Isaac are also pursuing the role.

Tom Hardy was once rumored to be in contention for “Doctor Strange,” though he has recently been courted for WB’s “Suicide Squad” and the title role in “X-Men: Apocalypse,” so don’t expect to see him join the MCU anytime soon.

Part of Marvel’s bold Phase Three plan, “Doctor Strange” follows a former neurosurgeon who becomes the Sorcerer Supreme and defends the Earth from threats both magical and mystical.