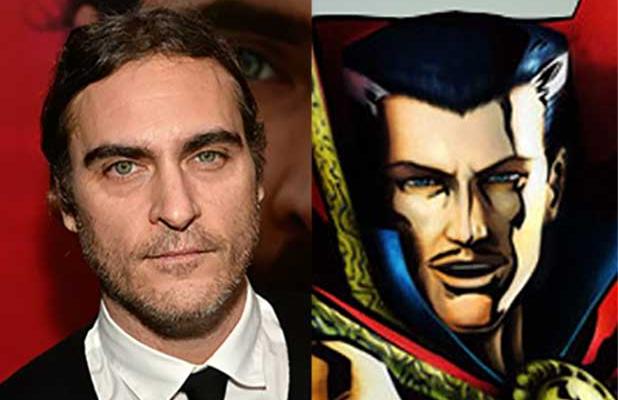 After months of negotiations with Marvel, Joaquin Phoenix has abruptly walked away from the studio’s next standalone superhero movie “Doctor Strange,” TheWrap has learned.

Phoenix’s exit from the negotiating table marks the latest talent-based setback for Marvel, which scrambled to find a director for “Ant-Man” earlier this summer following the departure of Edgar Wright due to creative differences.

While Benedict Cumberbatch and Tom Hardy have both been mentioned as candidates for “Doctor Strange,” the role will likely go to another actor, with “The Leftovers” star Justin Theroux rumored to be in the mix before Marvel engaged Phoenix in discussions. Oscar winner Jared Leto is also, inexplicably, available, though he has been content focusing on his popular rock band 30 Seconds to Mars while searching for the right directing vehicle.

“Doctor Strange,” which does not have an official release date yet, is part of Marvel’s bold Phase Three plan. The story follows a former neurosurgeon who becomes the Sorcerer Supreme and defends the Earth from threats both magical and mystical.

TheWrap was the first outlet to link Phoenix to “Doctor Strange” and while this reporter would’ve loved for the deal to close in order to cement bragging rights, I’m actually glad Phoenix walked away from the latest comic book movie, for several reasons.

To be clear, I haven’t read the “Doctor Strange” script by Jon Spaihts, nor do I know what tricks talented director Scott Derrickson has up his sleeve. I’m sure that regardless of who winds up playing Stephen Strange, Marvel will deliver another blockbuster hit, though Phoenix certainly would’ve made the movie pretty damn interesting.

But to be honest, “Doctor Strange” never made sense for Phoenix. Marvel “needed” Phoenix more than the actor needed Marvel. Sure, it never hurts to star in a global blockbuster, but I’m not sure Phoenix is the type of actor who thinks or cares much about cultivating his “brand.”

Phoenix is a bit of an odd duck, if you will, having always relished his creative freedom and the ability to be flexible. The Oscar-nominated actor has eschewed blockbuster fare throughout his career, famously passing on the villainous role of Lex Luthor in “Batman v Superman: Dawn of Justice.”

Instead, Phoenix has gravitated to challenging, auteur-driven indies such as “The Master,” “Her” and Paul Thomas Anderson‘s upcoming “Inherent Vice,” and frankly, that’s where we need him right now.

We’ve already lost some of the world’s most talented actors to mind-numbing, CGI-laden comic book movies and while these stars still manage to shine brightly in front of a green screen, the entire Hollywood ecosystem suffers.

Of course, Hollywood knows this — there’s even a funny bit in Fox Searchlight’s “Birdman” about how all the best actors are too busy donning capes and cowls to take the stage and tread the boards in front of a live audience.

Some actors have made it a point to strike a balance between art and commerce, such as Jeremy “Hawkeye” Renner (“The Immigrant”), Scarlett “Black Widow” Johansson (“Her”), Josh “Thanos” Brolin (“Inherent Vice”), Mark “Hulk” Ruffalo (“Foxcatcher”) and Emma “Gwen Stacy” Stone. But it seems that Phoenix wasn’t swayed by their example.

He certainly made the effort to engage with the project and explore the opportunity, as he was seen buying “Doctor Strange” comics during a break from filming Woody Allen’s next movie. So if it wasn’t the material, then what was it? Money? The time commitment? Or something else entirely? I suspect the latter.

I fully acknowledge that Marvel has a reputation for being stingy with actors not named Robert Downey Jr. and between lengthy shoots and subsequent worldwide press tours, the studio demands a lot of its actors. Phoenix is as versatile as any actor but he’s also hard to pin down, and that’s exactly what he may have been afraid of with “Doctor Strange” — being pinned down. As TheWrap wrote back in July, “many would assume that Phoenix is one of the last actors in Hollywood who would be willing to lock himself into a potential long-term deal.” In fact, TheWrap was initially reluctant to publish the first story about Marvel’s courtship of Phoenix due to that facet of the actor’s reputation.

But what if that wasn’t it? Would Phoenix really have taken this long to make a decision if Marvel was steadfast about the number of films he would have to appear in — a number we still don’t know?

Personally, I question whether it came down to money or the oft-rumored time commitment. If I was Joaquin Phoenix (which I assure you, I’m not), I would’ve passed on “Doctor Strange” because I wouldn’t want all the fanboy attention that comes with it.

Phoenix is going to be bombarded with “Doctor Strange” questions when he does press for “Inherent Vice” at the New York Film Festival this weekend and I’m sure it’ll be annoying as hell. Now imagine getting those questions at every public appearance for the next 10 years.

I mean, you should’ve seen the shocked look on Chris Evans’ face when I told him I had no plans to ask any questions about “Captain America 3” during our interview for his directorial debut “Before We Go” in Toronto. Just ask Harrison Ford how he feels about getting “Star Wars” questions for the past 35 plus years.

The real reason I’m glad Phoenix passed on “Doctor Strange” is that in my not-so-humble opinion, Marvel movies are simply overrated. Sure, “Captain America: The Winter Soldier” and “Guardians of the Galaxy” are fun films, but I have no desire to immediately watch either of them again.

Also read: ‘Guardians of the Galaxy’ Rockets Past $300 Million at Both Domestic, Foreign Box Office

Yes, Marvel has cracked the code at the box office and is the envy of everyone on Wall Street. But speaking as a passionate movie lover who appreciates good writing, I’m confident in saying that Marvel has yet to put all the elements together to create the perfect package — something I could recommend to my parents, a la “The Dark Knight.” I shouldn’t be the only one holding Marvel to a higher standard — it’s time for fans to demand more, too.

Like the Edgar Wright/”Ant-Man” situation, we’ll never know what really happened with “Doctor Strange,” which is a shame. Instead, speculation regarding Phoenix’s decision will surely run rampant, which isn’t fair to him or Marvel, neither of whom were in a rush to provide an explanation of what happened or why.

This Is Infamous first reported that Phoenix had ended talks with Marvel, though the site also claimed that Ethan Hawke was in talks to star, which is not accurate at this time according to multiple sources.