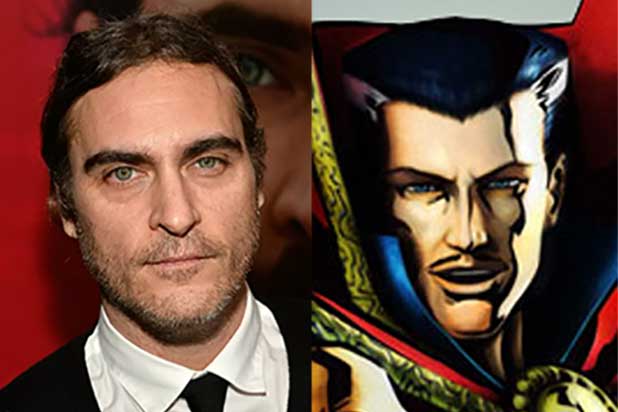 As Marvel finalizes surprises for its Comic-Con panel on Saturday, the rumor mill regarding “Doctor Strange” has reached a fever pitch and the actor who has been mentioned most often for the coveted superhero role is none other than three-time Oscar nominee Joaquin Phoenix, multiple individuals close to the casting process have told TheWrap.

While insiders caution there is no deal in place yet, multiple sources say Phoenix is in consideration and has had discussions about the movie.

Many would assume that Phoenix is one of the last actors in Hollywood who would be willing to lock himself into a potential long-term deal, but it’s possible that he’s not being asked to sign the same staggering multi-picture contract that other actors in the MCU have.

Phoenix had previously been courted for the role of Lex Luthor in WB’s “Batman v Superman: Dawn of Justice,” and it’s believed that those talks would not have gotten as far as they did if Phoenix had no interest in doing a comic book movie.

Also read: Jeff Sneider: If I Had an Oscar Ballot, Joaquin Phoenix, Michael B. Jordan Would Be On It

While Phoenix has eschewed blockbuster fare throughout his career for the most part, sticking to challenging, auteur-driven indies such as “The Master,” “Her” and Paul Thomas Anderson‘s upcoming “Inherent Vice,” it’s possible that his recent co-stars have pitched him on the pros of being part of the Marvel family.

Those actors have demonstrated the ability to slip seamlessly between serious adult movies and lighter, more family-friendly superhero fare. Meanwhile, the last big-budget movies Phoenix starred in were M. Night Shyamalan‘s “The Village” and “Signs,” which led to his casting as Johnny Cash in “Walk the Line.”

While the “Doctor Strange” rumor mill has focused on stars like Benedict Cumberbatch and Tom Hardy, both actors appear to have had scheduling issues with the project, which Scott Derrickson is directing from a script by Jon Spaihts.

Jared Leto and Justin Theroux were also mentioned as possibilities to play the Sorcerer Supreme, but Leto is keen to direct after winning an Oscar for “Dallas Buyers Club,” while Theroux remains committed to HBO’s new series “The Leftovers.”

The character was first introduced to Marvel comics readers in 1963, and he has interacted with Spider-Man, Nick Fury and the Fantastic Four over the years. In fact, “Stephen Strange” was referenced in “Captain America: The Winter Soldier.”

Kevin Feige is producing “Doctor Strange,” which will be executive produced by Louis D’Esposito and Stan Lee, among others.

Since Doctor Strange isn’t as well-known as Iron Man, Thor or Captain America, it’s believed that Marvel has been going after high-profile actors to better introduce the character to audiences.

Like Downey Jr. before him, Phoenix is a brilliant actor who at first glance, may not seem like a fit in the MCU, but his versatility as a performer leaves him capable of anything. The possibility of playing a hero rather than a villain also may have been more appealing to Phoenix, who previously played villains in “Gladiator” and “The Immigrant.”

Taking into account his antics during the filming of “I’m Still Here,” Phoenix would seem like a perfect fit for Doctor Strange, but he’s a hard actor to pin down, so stay tuned…

Phoenix is represented by WME and attorney David Weber.

One of the comic book stores in CT had Joaquin Phoenix stop by. He was looking for Dr. Strange comics.