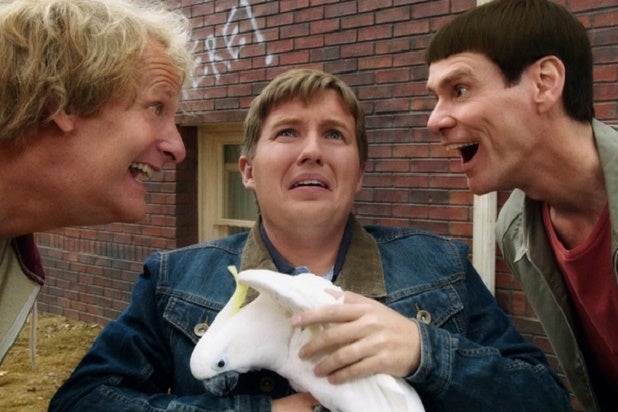 Fans have waited 20 long years to see Jim Carrey and Jeff Daniels return as impossibly stupid best friends, Lloyd Christmas and Harry Dunne. While “Dumb and Dumber To” is set to rake in the most money at the box office this weekend, it’s not inspiring many critics to tell their readers to go see it.

The Farrelly brothers’ latest directing effort has only achieved a 28 percent approval rating on Rotten Tomatoes, with 41 out of 57 reviews counted being declared “rotten.”

Also read: 'Dumb and Dumber To': How to Make a Long-Awaited Sequel Terrific Not Terrible

The Universal Pictures release sticks to the original’s road trip formula, but this time the boys cruise to Texas in order to track down Harry’s long-lost daughter (Rachel Melvin), who might just be the only person able to save his life by donating a kidney. Lloyd, as usual, is only after the prospect of getting laid.

TheWrap‘s Inkoo Kang was among the minority who enjoyed the comedy, which let’s be honest, had a slim shot of ever topping its predecessor.

“I probably laughed more watching “Dumb and Dumber To” than any other movie this year,” Kang wrote in her review. “It’s not just that the jokes and gags arrive one after another, barreling toward the audience with relentless regularity like baseballs from a pitching machine, although that certainly helps.”

The movie is a familiar restructuring of the first. It proudly features new versions of the ridiculous dream sequences you laughed at in 1994, the “second most annoying sound in the world,” Harry and Lloyd’s blind neighbor Billy, bad guys after money, and the dumb duo accidentally outsmarting their enemies. It’s chock full of intentional winks and nods to their last adventure, and that’s just fine with Toronto Star critic Peter Howell, because it all results in a steady stream of laughter.

“Rehashing plot points of the original is perfectly OK, as it turns out. I laughed a lot at this movie, possibly even more than I did at the original film, which I enjoyed quite a bit,” Howell wrote. “‘Dumb and Dumber To’ is that rare long-delayed sequel that hasn’t suffered from a weight of unrealized expectations, probably because the bar is always low on comedies like this.”

See photos: Hollywood's 17 Most Powerful Brothers in Honor of 'Dumb and Dumber To'

“This despite the fact that lead dodos Lloyd Christmas (Jim Carrey) and Harry Dunne (Jeff Daniels) are played by actors now aged 52 and 59. Dumbness apparently transcends age, and both actors throw themselves into the goofiness with total abandon,” Long wrote. “True, the emphasis this time around seems a bit more verbal than physical. But Carrey still brings his clownish agility to the party, and Daniels, as smart an actor as there is, is fearlessly oblivious at all times.”

But back to the disappointed majority. While Los Angeles Times critic Betsy Sharkey gave Carrey major props for a “mind-blowing” performance, she couldn’t say the same for his co-star, or the rest of the movie.

“If you buy a ticket to a movie called ‘Dumb and Dumber To,’ dumb is precisely what you expect, want and possibly need. But what felt fresh in Peter and Bobby Farrelly‘s original “Dumb and Dumber,” with the Carrey-Daniels dense duo channeling the Stooges and Jerry Lewis and something else entirely, feels strangely old-fashioned two decades later,” Sharkey wrote. “To his credit, Daniels tries his best, but when it comes to dumb and dumber, Carrey is better.”

Also read: 'Dumb and Dumber To' Is the Smart Choice to Win Weekend Box Office

Village Voice critic Stephanie Zacharek noticed “more than a few inspired gags,” but concluded the script whiffed more than it hit her funny bone, and was missing a vital component that made the first a beloved classic.

“Something’s not right. There’s a vague sourness to ‘Dumb and Dumber To,’ uncharacteristic of the Farrellys,” Zacherek wrote. “In ‘Dumb and Dumber To,’ the moments that underscore Lloyd and Harry’s devotion to each other feel overwritten and forced (even if they do include a few instances of wholly selfless diaper changing). The two spend more time dishing out sharp jabs to the nuts and semi-advertently killing off tropical birds than doing sweet stuff like smelling each other’s farts — although there’s a little of that, too.”

Arizona Republic critic Bill Goodykoontz wasn’t impressed with the sequel he classified as “not worth the 20-year wait,” but then again, he admits he didn’t particularly care for what he saw two decades ago, either.

“The movie has its fans, however, and there’s a pretty good chance they’ll be happy with the sequel, because 20 years later, Carrey’s Lloyd Christmas and Daniels’ Harry Dunne haven’t upped their IQs one iota,” Goodykoontz wrote. “But whatever was fresh about Carrey and Daniels’ descent into stupidity the first time around just isn’t the same in the sequel.”