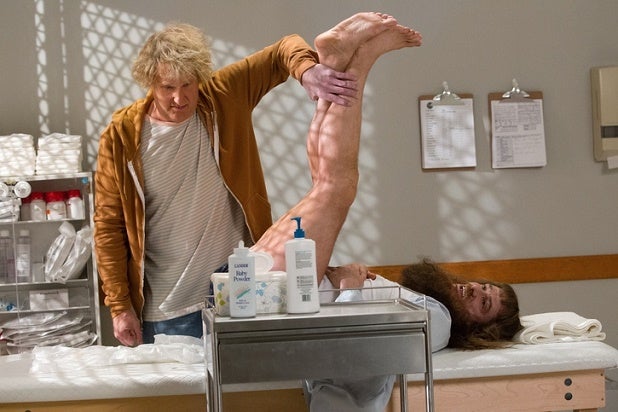 “Dumb and Dumber To” has the inside track for the weekend box office crown, though Baymax and his pals from reigning champ “Big Hero 6” are right on its heels.

Universal’s comedy sequel arrives nearly 20 years after the legendarily low-brow original. It returns stars Jim Carrey and Jeff Daniels as nincompoops extraordinaire Lloyd and Harry, as well as directors Peter and . It’s tracking strongly — and showing surprising strength with young moviegoers — and an opening north of $30 million looks likely. That should be enough for the win, depending on how “Big Hero 6” holds.

On Tuesday, which was Veterans Day and a school holiday, the Disney Animation family movie brought in a whopping $10.5 million to up its domestic total after five days to nearly $72 million.

The weekend’s only other wide opener is “Beyond the Lights,” a low-budget romantic drama written and directed by Gina Prince-Bythewood (“Love and Basketball”). Distributor Relativity Media will have it in roughly 1,750 theaters and an opening in $8 million-$10 million range looks likely.

Also drawing attention will be Christopher Nolan‘s space epic “Interstellar,” which returns for its second weekend. Paramount is banking on a strong hold and another big IMAX showing for the Matthew McConaughey sci-fi saga.

“Nostalgia matters,” BoxOffice.com vice-president and senior analyst Phil Contrino told TheWrap. “A lot of people still love ‘Dumb and Dumber,’ and lot of young moviegoers have seen it at home, so the signs pointing to a big opening don’t surprise me.”

Sales to “Dumb and Dumber To” were accounting for more than half of the advance sales at online ticket broker Fandango Wednesday morning, and its business was pacing ahead of those for another comedy sequel, “Anchorman 2: The Legend Continues.” That Paramount release opened to $26.2 million last December and brought in $127 million domestically and $173 million worldwide.

There aren’t any reviews for “Dumb and Dumber To,” but critics hated the original, and it still brought in $127 million domestically and another $120 million overseas after opening to $16 million in December of 1994.

Universal will have it in 3,152 theaters.

“Beyond the Lights” is the first film to be released under Relativity Studios’ newly formed multicultural division run by Matt Alvarez, who was a producer and executive producer the “Ride Along” and the movies.

Amar’e Stoudemire, who plays for the NBA’s New York Knicks and is represented by Relativity Sport, is one of the producers, along with Tephanie Allain and Reggie Rock Bythewood.

“Beyond the Lights” tells the story of emerging music supertar Noni, whose life changes when she meets Kaz Nicol, a young cop and aspiring politician who has been assigned to her detail. The soundtrack features songs from Mbatha-Raw, Rita Ora, Mavado featuring Nicki Minaj, and Jacob Banks.

There aren’t a lot of reviews yet but they’re good and “Beyond the Lights” is at 91 percent positive on Rotten Tomatoes. Meanwhile, two films with awards ambitions highlight the specialty releases.

Open Road Films is rolling out “Rosewater,” the drama written, directed and produced by Jon Stewart and based on the memoir “Then They Came for Me” by Maziar Bahari and Aimee Molloy.

The film tells the story of Bahari, a London-based Iranian-Canadian journalist (played by Gael García Bernal) who was held in Iran for 118 days because of an interview he gave regarding the country’s presidential election.

Open Road will have it in roughly 350 theaters.

Bennett Miller directs from a screenplay by E. Max Frye and Dan Futterman. Miller won the Best Director Award at the most recent Cannes Film Festival, where “Foxcatcher” was in the main competition section.